The 2013 Thanksgiving event is HERE! Lisa gets an outfit. We get a new character, a casino and A LOT of balloons. A LOT.

OPENING
Homer: What’s this weird paper stuff in the mailbox?
Lisa: It’s called “mail.”
Homer: You mean they invented a paper version of electronic mail? Science is amazing! Ooh! A big “mail”! Maybe it’s full of more “paper”.
Lisa: It’s a Sacagawea costume I ordered. I saved up all my Sacagawea dollars to pay for it.
Homer: Honey, the dollar doesn’t have Sacawhoever on it. It has George Washington, the inventor of money.
Lisa: I want to dress up as Sacagewea to celebrate the rich cultural history of Thanksgiving.
Homer: A white girl dressing up like a native American? I don’t know, that sounds a little racist to me.
Lisa: Just give me the costume. 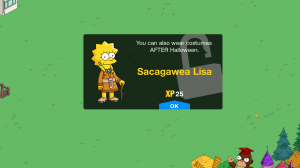 KRUSTYLAND
Homer: That costume looks great on you Lisa. You’re the cutest racist I’ve ever seen!
Lisa: Stop calling me that!
Homer: If I walked around pretending to be W.E.B. Dubois, whoever that is, you’d call ME racist.
Lisa: That’s true… but… because… cultural… something… I SPENT ALL MY MONEY OF THIS COSTUME!!
Homer: Wampum, sweetie. You spent all your wampum on this costume.
MAIN QUEST LINE
Lisa: Dad, I was thinking… maybe this year we could have a vegetarian Thankgsgiving.
Homer: So just because you feel guilty about walking around in a racist costume, I have to suffer?
Lisa: STOP CALL ME RACIST!!!
Homer: How about “racish?” the “ish” means it’s not fully racist, but still a little.
Lisa: Talking to you I fee an even deeper connection with oppressed peoples everywhere.
Homer: Great, maybe you can dress up as them next.
Homer: In the meantime, don’t change the only thing we know about Thanksgiving: THEY ATE TURKEY.
Lisa: *sigh* I’m the only animal rights activist in this whole town.
Homer: Activish.

Homer: Hey Apu! Turkey me!
Apu: Oh but that I could turkey you, Mr. Homer.
Homer: TURKEY ME!!!
Apu: Unfortunately none of my usual brands of turkey were delivered. Not the Butterbutts, not the Gobbler Deluxe, not even a single Drumstick King.
Homer: TTTUUURRRKKKEEEYYY MMMEEE!!!!!!
Apu: If you want a Thanksgiving turkey, your only hope is to go to a farm and buy one.
Homer: You mean… ME turkey me?

Homer: Hey Cletus, hook me up with your fattest most juicy turkey!
Cletus: Want me to kill it and pluck it for ya?
Homer: Why should you have all the fun? I’ve got a beheading axe in the car… barely used.
Cletus: Well, the turkey’s out back. Don’t forget to drain the blood.
Homer: Please. Ending the life of turkeys by draining their blood is my life blood.
Cletus: You a silly feller all right I reckon.

Homer: Hey ding-dong, there’s no turkeys out there. Just meth labs and kids smoking meth. And a lot of meth lying around.
Cletus: My gobblers has been taken?! Oh, this is terrible! I’m so sad, I’m gonna need me a whole lotta meth.
Homer: No Cletus, this is one problem meth can’t solve. Did anything strange happen that could explain the missing turkeys?
Cletus: Couple a nights ago I was milkin’ the cow, and smokin’ meth, in the barn when I see bright lights.
Homer: ALIENS! They must have been kidnapped by aliens!
Kang: Why would we eat the dry meat of turkeys when we can gorge ourselves on the tender flesh of turkey-fattened humans?
Kotos: Turkey-fattened humans are our foie gras!
Homer: What about regular foie gras?
Kang: We would never eat that! It’s cruel!

Homer: Something terrible has happened! I don’t have blood on my hands!
Marge: That sounds like a good thing. Please let it be a good thing.
Homer: No, the blood on my hands that I crave is turkey blood. But all of the live turkeys are missing!
Lisa: What about a vegetarian turkey? A tofurkey? Or a seitan-urkey? Or a spelt-urkey?
Homer: How about a barf-urkey with extra barf sauce and a side of barf stuffing, barf potatoes and barberry jelly with barf pie a la barf for dessert?
Lisa: Vegan food doesn’t taste like bard. Except quinoa.
Homer: Don’t worry, I’ll get back our turkeys. with an old-fashioned turkey hunt.
Homer: Now, where do we keep our dynamite?

Homer: Gentlemen. We are about to embark on the most important mission of our lives.
Ned: Oh dear! Did a child go missing? Did an elderly person with dementia wander off?
Moe: Did some kind of monkey with a deadly virus escape from a secret lab and we gotta capture it alive to create an antidote before it turns us into a Planet of the Apes?
Homer: Worse. And different. All of turkeys in Spingfield have gone missing. It’s up to us to hunt them down, otherwise this year’s Thanksgiving will be…
Homer: Vegetarian!
Ned: …

Homer: We can’t find the turkeys anywhere!
Ned: God will be so sad that we aren’t eating his blessed creatures on a day celebrating the stealing of a land from his other blessed creatures.
Moe: On the bright side, I did find a diseased monkey that might or might not have turned us in a Planet of the Apes. I hired it to work the bar.
Homer: I think it’s time to face facts. This Thanksgiving, we won’t be eating anything with a face.
Ned: *GASP*
Moe: *GASP*

Ned: It just doesn’t feel like Thanksgiving without turkey.
Homer: Deliciously decapitated turkey.
Moe: With sauces made from its death drippings.
Homer: Let’s face it. Without a dead turkey, it’s Thanksgiving itself that’s dead.

Lisa: Everyone seems to think Thanksgiving is all about gluttony and ceaseless consumption.
Lisa: A sparse, frugal and healthy meal of steamed Swiss Chard and assorting other international chards should cure them of their obsession with meat.
Lisa: Without dead flesh in their stomachs, Springfielders will experience a heightened sense of peace and well-being.
Lisa: And so will I… as I hang out with the living turkeys I’ve hidden in the brown house!
Lisa: *sneaky chuckle*

Lisa: Oh no! The turkeys are gone!
Lisa: They must have escaped while I was feeling self-satisfied!
Turkey: *Gobble gobble*
Lisa: Except this little gobbler, who fell asleep listening to one of my many tiresome speeches to myself.
Lisa: Don’t worry little turkey! I’ll find your friends and save them from becoming a part of this carnivorous festival of death!
Turkey: Zzzzz…
Lisa: Oh… my self-involved monologue must have put him to sleep.
Lisa: Maybe I can get some help from someone who actually knows about animals, instead of just talking about them all the time.

Lisa: Cletus, could you share your country wisdom so that I might find some escaped turkeys?
Cletus: Don’t you patronize me.
Lisa: What?
Cletus: I know when a city feller is talking down to me. I’m country, not stupid.
Lisa: You’re right…. I’m sorry. You’re not stupid.
Cletus: I’m just joshin’ ya. I is stupid! Powerful stupid!

Cletus: To catch a Turkey, you’d need a Turkey caller.
Lisa: Do you have a turkey caller I can… borrow?
Cletus: Borrow? That’s communist talk! I’ll trade you one for some of those foot-bags you got.
Lisa: You mean shoes?
Cletus: No! Your foot bags!!!

Posted in Mobile, Simpsons Tapped Out.