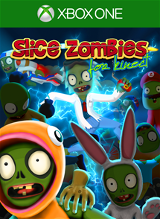 Slice Zombies is a Kinect only game developed and published by Made for the Xbox ONE. Think Fruit Ninja and replace the fruit with zombies and you know what Slice Zombie is all about.

Slice Zombies contains one game mode. You have to survive 1:10 slicing zombies, zombie hands and coins while avoiding bombs. You start with 3 lives and you lose one for every bomb you slice or zombie you miss. Zombie hands give a point bonus when sliced and the coins are used to buy power-ups you gain access to while you level up. You can change basic things like the background or the trail of your slicing. There are also actually helpful powerups like an extra life or activating new zombie hands to slice that do everything from spawning more coins to healing back a lost life. There are quite a few things to unlock in the game’s 21 levels of play and you almost level up too fast. It seems after every other game there is a new zombie or something else to buy and you unlock things a lot faster than you are going to earn the coins you need to buy them.

The art is comical and highly detailed and Slice Zombie’s music has a nice carnival type theme to it. There are quite a few different zombies you will be hacking at with several different launch patterns which adds some nice variety to the game. Later in the game you unlock stunt zombies that float up on balloon to pop. There is a fat zombies that you can earn extra points by hitting multiple times. Getting to the 1:10 mark is not a simple task in the beginning. There are typically a LOT of bombs on the screen at once and it takes some getting used to to start learning the varies patterns you are going to see. As you level up you’ll unlock permanent powerups like starting with an Extra Life and things like high value coins.

Since it’s a single player game you need to get pretty close to the Kinect for you to be able to cover the whole screen. The game does a good job of giving you a straight down the middle line to base yourself on before every game and the tracking of your hands is above average. Issues arose in navigating the menus. It’s seems to be on a whole different tracking scheme. A quick email to the developer and MADE let me know I needed to hold my hand still and kind of off to the side and it would typically pop up for control pretty quick. Most Kinect games you can utilize the controller in menus which frankly with how Kinect works as a whole is a option I ALWAYS use but for Slice Zombie the controller is only good for dashboarding. MADE also pointed out that you can use the Xbox voice controls for “xbox play” and “xbox back”.

I usually don’t talk too much about achievements in a game because that’s a narrower target audience and I try to play games that I will like, not games I can 1000. But for those of you who are achievement hunters Slice Zombie is a very good price to time invested ratio. The full 1000 is easily obtainable in a single day and the list is mostly slice this many hands or heads. The longest achievement is for

Including a tutorial on Kinect tracking for Slice Zombies would of really helped the learning curve but once I figured out the secret to getting tracked properly I never had another issue. I’ll be honest that I’d hoped there would be more than one game mode to play and some form of multiplayer, be it at the same time or a back and forth mode to spice up the offering. Slice Zombies has all the guts of a nice, fun little Kinect game but it falls short do the lacking of any real long term playability.

PROS:
1) Fun little game
2) Art and music
3) Once you figure it out good Kinect tracking

CONS:
1) No Kinect instructions
2) No controller support in menus
3) Only 1 game mode