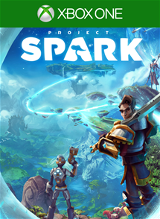 Project Spark is a “game” where the main purpose is to get you to use it to create your own games. Where as games like Little Big Planet are games first, and give you the ability to create your own levels, Project Spark is where you create games and there happen to be a few official games to play. The majority of the content is geared towards you making a game. And you can make just about anything. 2-D sidescrollers, top down dual stick shooters, RPGs with leveling systems and unlocks. You think it up and you can make it, to a degree. This is a Free to Play after all. As with all these types of games there are a select few creators making amazing things that are definitely worth your time to play, but there are also thousands of unplayable boring garbage to wade through to be able to find the good.

Team Dakota has included a short 3-D adventure game called Crossroads that is playable right out of the box. It’s really a story you are telling. Everything from what you are seeking to what buildings are in the starting town to what boss you will fight is all up to you and is generated in real time and is quite a bit of fun. My issue with Crossroads is that it’s really just a thinly veiled attempt to get you to buy DLC. Almost every options comes with 1 or 2 DLC options that when chosen send you straight to the store to buy them.

As a Free-to-Play game I understand that things are going to cost real world money. They need to make money to keep making content. Unlike 90% of the world, I understand that. Content Packs cost between 500 and 1,000 tokens each, which translate to $5 to $10. Some of these, like the Massive World Builder, are almost a requirement to build a game of substance. At launch there are already over 15 content packs to buy with various combos and bundles making buying decisions even harder. Here is a graph that Mescad made just to try to track what comes in what. Please look at this and tell me as a new player what the heck is going on here:

Most of the content packs can be bought with in-game money. Money is most easily earned through a series of daily challenges. The kick to the gut is that almost a quarter of them require DLC to even do. There are challenges for beating bosses that only come in DLC and there is always challenges for all 4 Champions, 2 of which are paid DLC. This money trickles in at crazy low rates. Like all F2P games you’ll earn a ton of money your first few days as challenges and milestone are easy to complete, by week two you are getting next to nothing. The other money grab is you can buy Spark Premium, for real money, which gives you a 200% bonus to XP and in game money and also allows you to buy DLC that costs real money for non-Premium players with in game money. So you have to pay real money to earn in game money to buy DLC without real money. WOW.

Project Spark also has a episodic game that is based on a cardinal sin of mine for creation games. The stuff that the devs put out, in Project Spark’s case: Void Storm, utilize things that we as players do not have access to in creating our own games. I expect the devs games to be better because of their vast knowledge and time with the engine, but I also expect to be able to look at that code and have it help me make my game better. Void Storm utilizes voiceovers and graphics and Kode that I don’t get to use. It would be one thing if these were presented as a showcase of things to come, but it feels more like they wanted to be able to do something that Project Spark couldn’t do, so they added it anyway.

Creating games is where its at through. Project Sparks has basic frameworks available to get you started and there is a active community to help with any issues you encounter. You are not going to create something amazing in the first 20 minutes though, there is a lot of code required to make things work. Coding in Project Spark is called Koding with a K, I guess just to be cool. It’s all based on When, Do statements and everything you can do is represented with Tiles so there is no guessing as to the structure or wording. Like When: My Player interacts with door, Do: Open the Door is a simple example. They give you the tools to make things a lot more complicated though like When: My Player has the Key and has killed 50 Goblins and I have 20 coins, Do: Open the Door. After you watch a few YouTube videos and really scour the forums you are well on your way to making a passable game. But who has the time or inkling to do that? If they had made the designer like they made Crossroads, where you are presented with choices. What kind of game do you want to make? What kind of enemies? Etc, etc and then you do in and do some tweaking it would have a much broader audience and a much lower bar to getting that first game created.

For you achievement hunters I feel like I’d be remiss if I didn’t spell out the insane amount of time it will take to complete Project Spark. First off there are a fair number of achievements that are tied to DLC. It is possible to earn enough in-game money to buy the DLC without real money but it’s going to be a fairly substantial time investment. There are also a LOT of achievements for getting an insane number of downloads (multiple levels on up to 50,000 downloads. Yes 50k) and votes on your levels. The game is currently flooded with garbage and instant win levels for people who are mad scrambling for achievements.

As it stands Project Spark is a great start. There is a lot there, but there is also a lot missing. The most positive thing I can say is the future looks bright as Team Dakota is actively working with the community to enact improvements and new content is constantly being added. For the cost of a big fat nothing it’s a fun quick enjoyable game even if all you do is play the Crossroads adventure game, which also is constantly going to be updated.

PROS:
1) Completely new game concept for the ONE
2) Official games are enjoyable and diverse

CONS:
1) Hard to find good games to play
2) Only 1 Tutorial included, needs more instruction
3) Money sink for more content
4) Hard to figure out what content to get and what it does