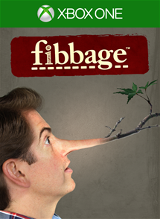 We have an answers page for Fibbage right HERE.

Ok so out of nowhere Fibbage is available on Xbox ONE today for just $6.99. Fibbage is a party game of bluffing like Balderdash. It can be played by 2 to 8 players. The game will ask you an obscure question and you need to try to make up the best lie you can out of everyone playing. The object is to get multiple people to select your lie, while you manage to pick the right one. Once everyone enters their lie (can’t think of one, the game will pick one for you but you get less points) the game present all the lies, the thruth, and a couple extra lies the game makes up so it’s harder to guess.

So I am going to assume your first question is how do you play a 8 person game on the Xbox ONE. Do you need 8 controller? Nope. You don’t even need a single controller. That is the genius of this game. Your ONE is really just the presenter/announcer. All of the players. Every single one of them plays through any internet browser. You don’t need Windows 7, you don’t need a iPhone you just need a browser. I tested IE, Chrome, Safari, Firefox and Torch and all worked perfectly.

When you start up the game it will present you with a Room Code. All the players then go to fibbage.com and enter that room code and their name and they are automatically entered into the game. It was maybe 2 seconds after hitting enter it appeared. Everything you see on the ONE is shown on the play page online, so really people don’t need to be in the same room or even country to play together. On top of that only the main profile logged into the ONE even needs the game.

Achievements. I got 900 out of a 1000 in about 20 minutes. The final single 100 is for seeing every single question. After 1 game (7 questions) I was at 3% so that last achievement is going to be a doozy. Also since it is run from a single Xbox ONE only the one main profile will ever be logged in, so only the presenter can get achievements but everyone answering counts towards them.

Most of the achievements are really straight forward. There is one for entering the Truth as your Lie. The game is pretty strict on what is correct. If you do manage to get the answer they want it will tell you right away, unlock the achievement, and make you pick a new Lie.

If you are just going for the achievements then playing 1 v 1 against yourself in 2 different browser windows will be the quickest. But truthfully this is fun little party game that I plan to play “legit” every chance I get. Seeing every question is a pain achievement wise, it’s refreshing game wise that they took the time to include so many options. This is not a kids game though as just in the single game I’ve managed to play there were questions about sex, drugs and violence. If you don’t want to buy it, but want to play shoot me a message and we can play anytime!