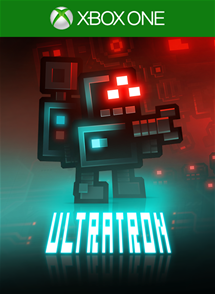 I’ve heard a lot about Robotron 2084 and just how amazing it is but I am ashamed to say I have never played it. When I first started to play Ultratron I was hearing it was a throwback to Robotron 2084, so that’s got to be a good thing right?

For those of you who don’t know anything (like me) about Robotron 2084 it was a top down twin-stick shooter and Ultraton fits the same mold. Ultratron is extremely fast paced and frenetic in it’s gameplay which pits you against hordes of enemy robots wave after wave.

You start off as a lonely robot with the ability to shoot. As you progress through the waves you get access to more and more upgrades to enhance your destructive abilities. These range from smart bombs and grenades to pets and drones (more on those in a minute). Every time an enemy is destroyed they leave behind dots which can be collected and used as credits to buy the various upgrades on offer at the end of each wave. Along with upgrades that make you more powerful there are defensive upgrades too. You can even upgrade your life count (shields) which have a set price based on how many you currently own. 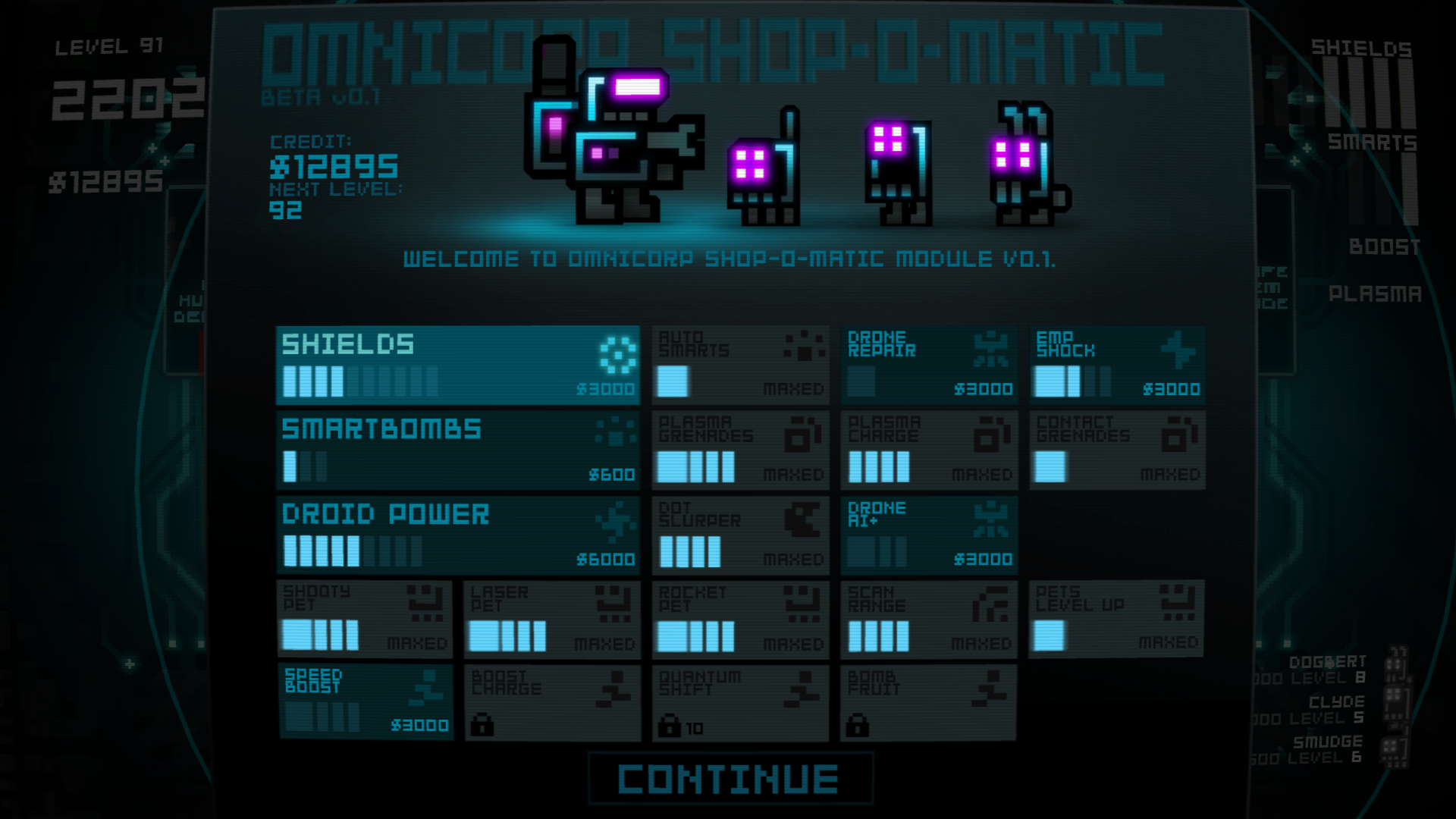 More upgrades than you can shake a stick at!

As I mentioned briefly earlier, you can buy pets and there are three to choose from; Shooty Pet, Laser Pet and Rocket Pet. They can each be upgraded and leveled up to increase their power and once you own them they cannot die. If they get hit they just stop fighting for you until you walk over them to save them. By the time you have leveled them all up you will be feeling unstoppable. The sheer amount of rockets and bullets flying around the screen by your pets is crazy.

Along with upgrades you can buy, there are power-ups which get dropped by little spiders. Again, there’s an array to choose from and if you decide not to pick them up, they stay there until you do or they get blown up meaning you can stack power-ups making you truly unstoppable for a limited time. 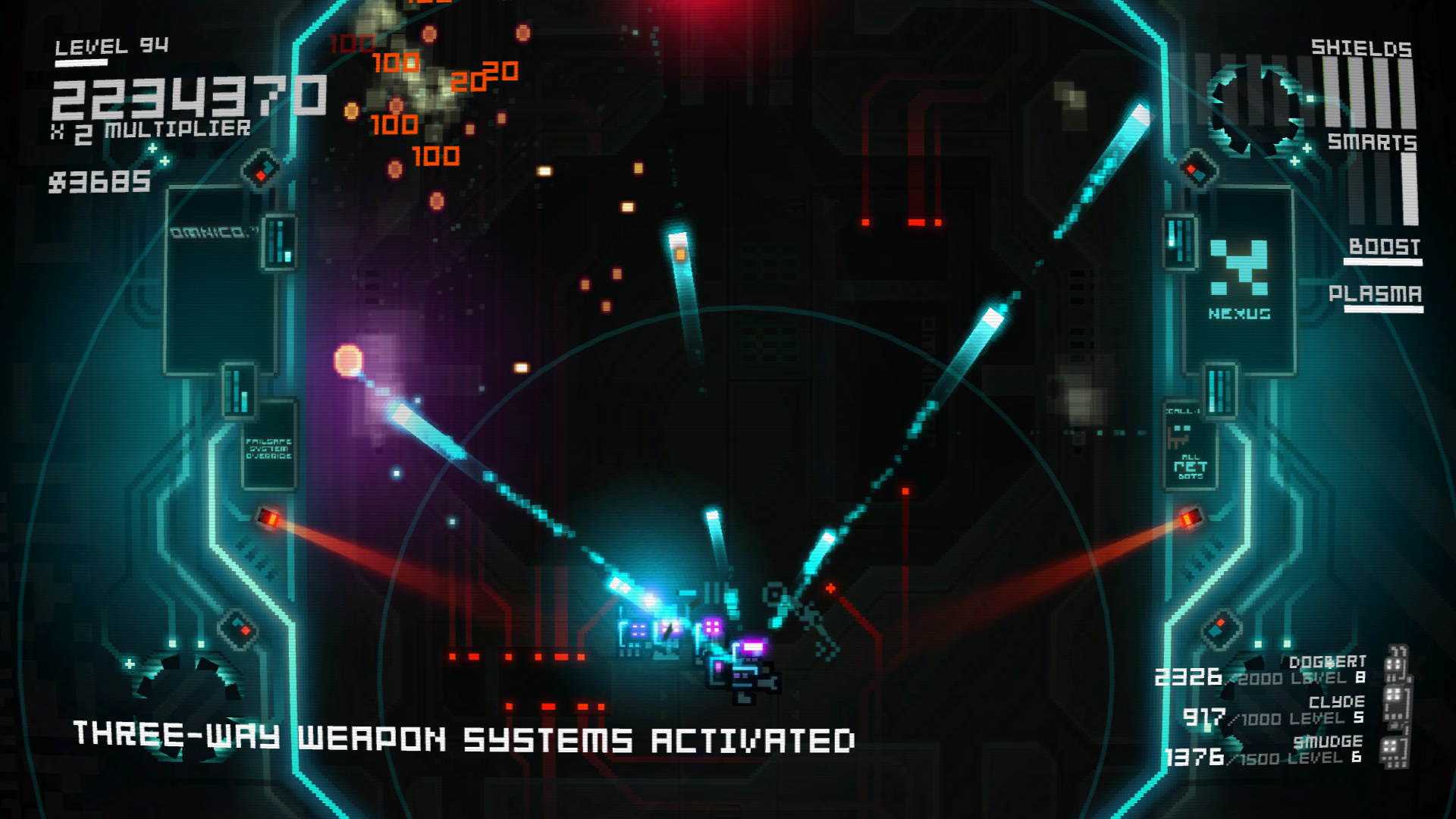 Each chapter is split into 10 waves, the tenth wave being a boss. In each chapter you also get challenge waves to shoot all the spiders, dodge waves to dodge all enemies without shooting them and assault waves for a chance to earn some extra credits.

The boss waves start off quite tame. At the end of the boss wave a massive robot appears slowly moving around the screen shooting you. Obviously the further you go in the game the tougher the bosses get. As an example, level 100 pits you against three of them at once…and it gets manic. 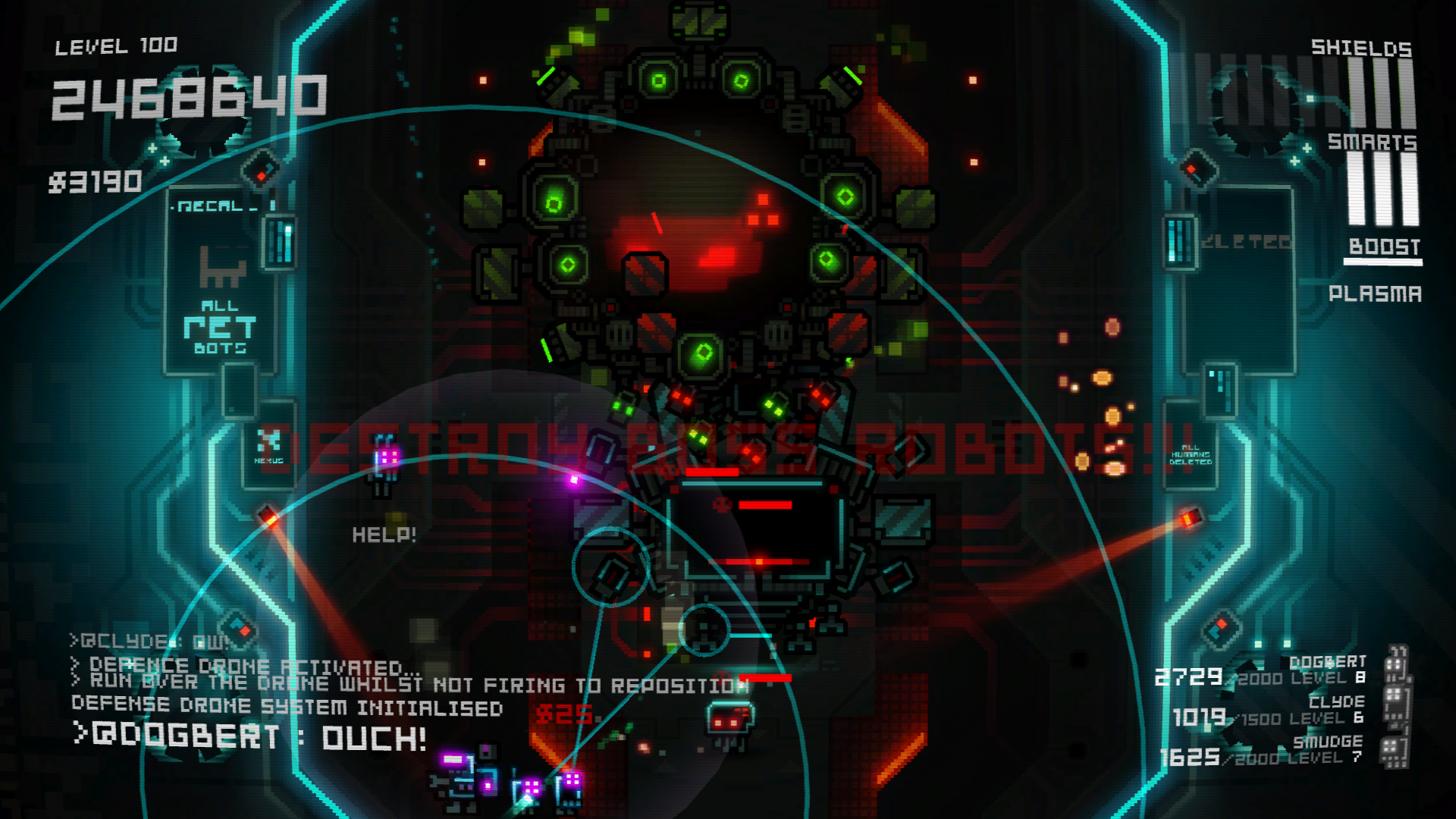 The visuals for Ultratron really suit the game. The 8bit/16bit graphics do it no harm what-so-ever and remember that’s coming from a guy who didn’t play Robotron. The colors really pop and the neon purples for the eyes of the pets etc are pretty cool too. The music is just as good as the gameplay, it fits with the craziness going on screen and keeps you engaged really well.

My only real hang up with Ultratron is the lack of online multiplayer. It does feature a local co-op experience but I didn’t really have anyone to try it out with for a prolonged period of time. What I was able to play it was just as solid as the single player experience.

As far as the achievements go, there are a handful of achievements for stacking certain power ups and upgrades to make super weapons. This requires a bit of planning and careful movements so you don’t accidentally pick up a power-up. Others include beating certain bosses, leveling up your pets and maxing out your shields. There is currently 1 glitched achievement but the Developer’s are aware of this and a patch is incoming. So don’t let the achievements scare you away from this great title.

Ultratron had a lot to live up to considering it was being compared to Robotron, and as far as I am concerned it delivered on all accounts. Although online multiplayer or co-op would have been excellent, there is more than enough going for it to make up for it. Ultratron should be held in it’s own esteem as a wonderfully made twin-stick shooter and it deserves to be mentioned in the same sentences as the best ones out there.

Posted in Reviews and tagged review, Reviews, ultratron, Xbox ONE.