Tower of Guns is a manic Roguelike First Person Shooter. The object of the game is to clear out the ever changing stages in the tower and defeat the bosses, (which happen to be MASSIVE guns) on that floor to move up the tower. With it being a Roguelike game, each floor layout is randomly generated along with the enemies that spawn each time you play, so the amount of replayability in this game is fantastic.
There are a slew of menacing enemies/guns to defeat as you fight your way through the floors on your way to the top of the tower. Making things more difficult is the obscene amount of projectiles being fired at you by the countless enemies. But don’t get me wrong, that isn’t a negative at all. 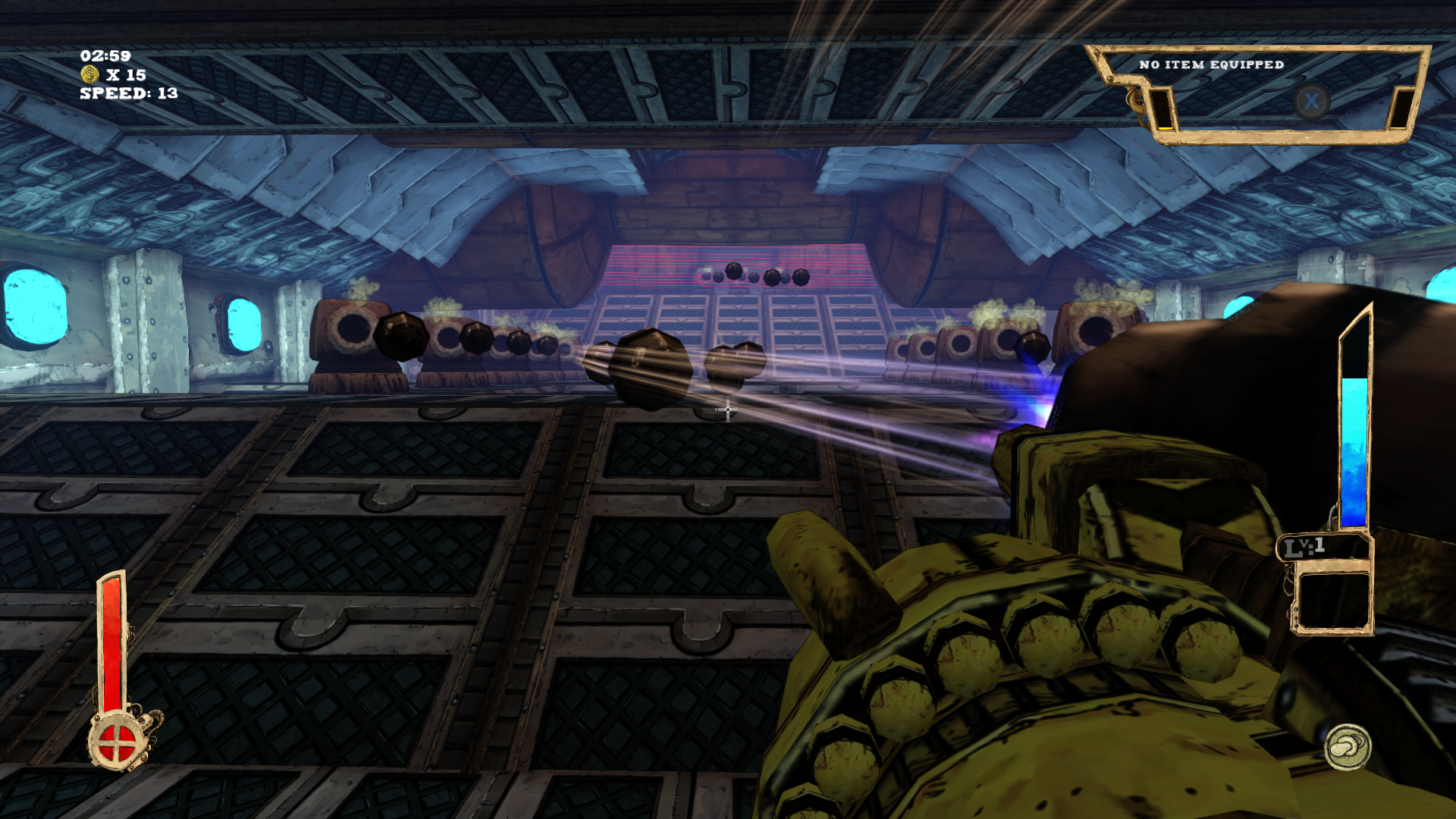 There are three game modes on offer, Normal, Endless and Dice mode. Normal mode serves as your introduction to the game with a little narrative and has a clear goal in mind. Endless mode gives you as many floors as you can handle, just keep going until you die. Finally Dice mode is basically anything goes. Each time you enter a room you’ll get a little message on screen telling you the mod for that room for example, bad loot. Literally anything goes here and this is where the most fun can be had.
When you first start the game you are given two guns to choose from, the Peas-n-carrots Pistol and the Portable Pizza Oven. It actually tells you to choose a better gun under the write up for the Peas-n-carrots Pistol it’s that bad. Along with choosing your gun you get to pick a perk to take with you. These range from ‘Bluegrass’ which starts you off with a Triple Jump to ‘Tooyoungtodie’ which turns the difficulty down and your damage, armour, loot and XP up. Personally, I struggled hugely with the difficulty (which is a recurring theme for me) so the ‘tooyoungtodie’ perk was a godsend!
There are a total of 8 guns  and 11 perks to unlock by doing various tasks whilst playing, my favourite gun being the Kegerator, because who doesn’t like shooting Unicorn Vomit at enemies? 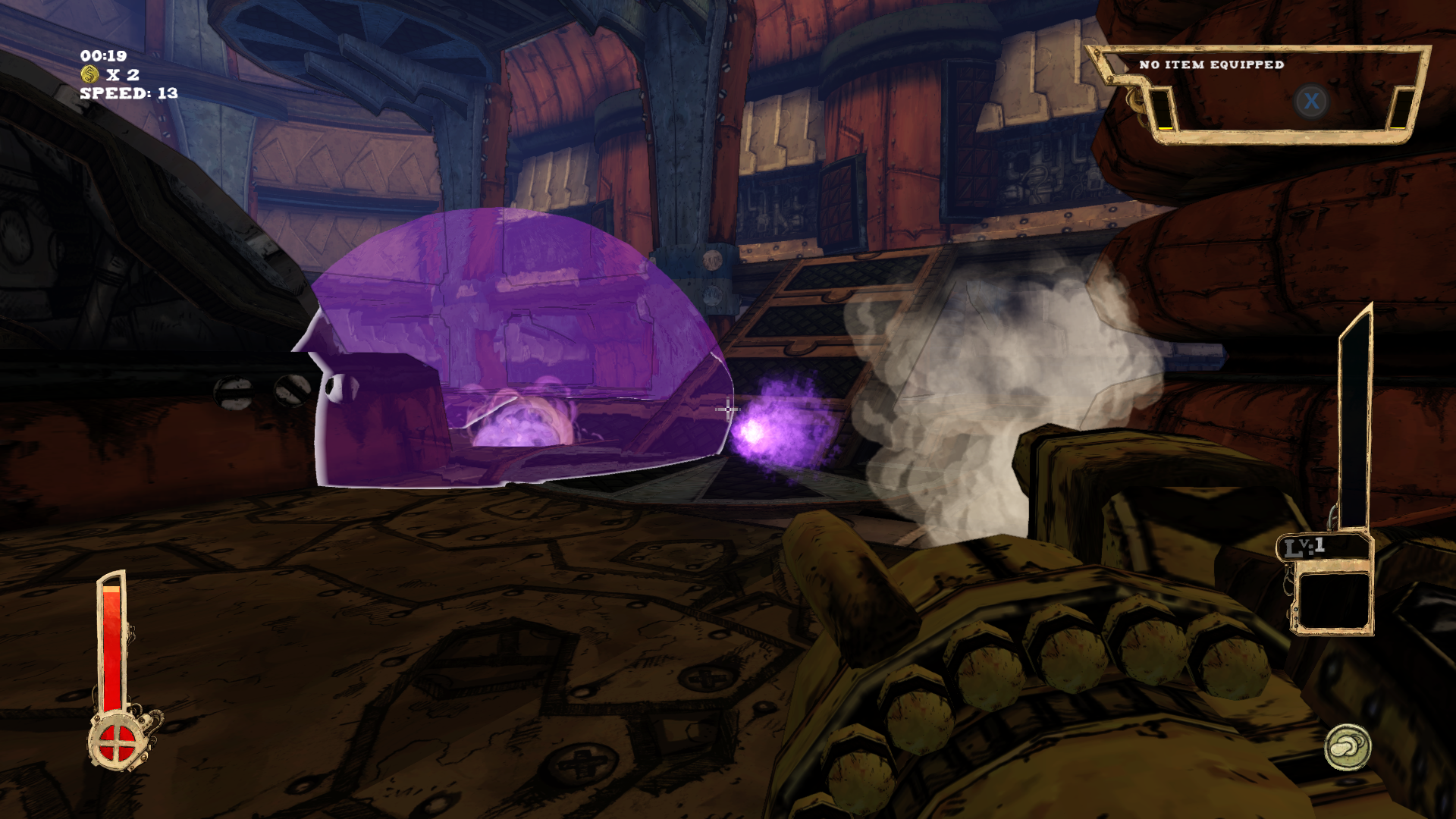 These Unicorns must have had one really dodgy curry last night to be puking purple…
When your life is depleted it’s game over. You go back to the main menu and start all the way from the bottom again. This is where frustration can set in especially if you have 3 or 4 runs of bad luck in the tower. To keep things fresh and fair, at the beginning of every fifth attempt to climb the tower you are greeted with a floor with a plethora of goodies to make your ascend more manageable.
Enemies drop loot in the form of gold coins, xp to level up your guns damage etc and yellow balls of energy to fill up your item meter. In most secret areas you either find large gold coins or a capsule to buy badges or items from and that is where I feel Tower of Guns really shines.
Some rooms can have upwards of 4 secrets to find, either behind hollow walls, up high on a ledge requiring multiple jumps or even under lava pits. I found myself searching each room top to bottom long after killing off all the enemies to find all the secrets each room has to offer only to get to the stats screen for that floor to discover I only found 50% of the secrets. There’s even an adorable thank you message in one of the secret rooms. 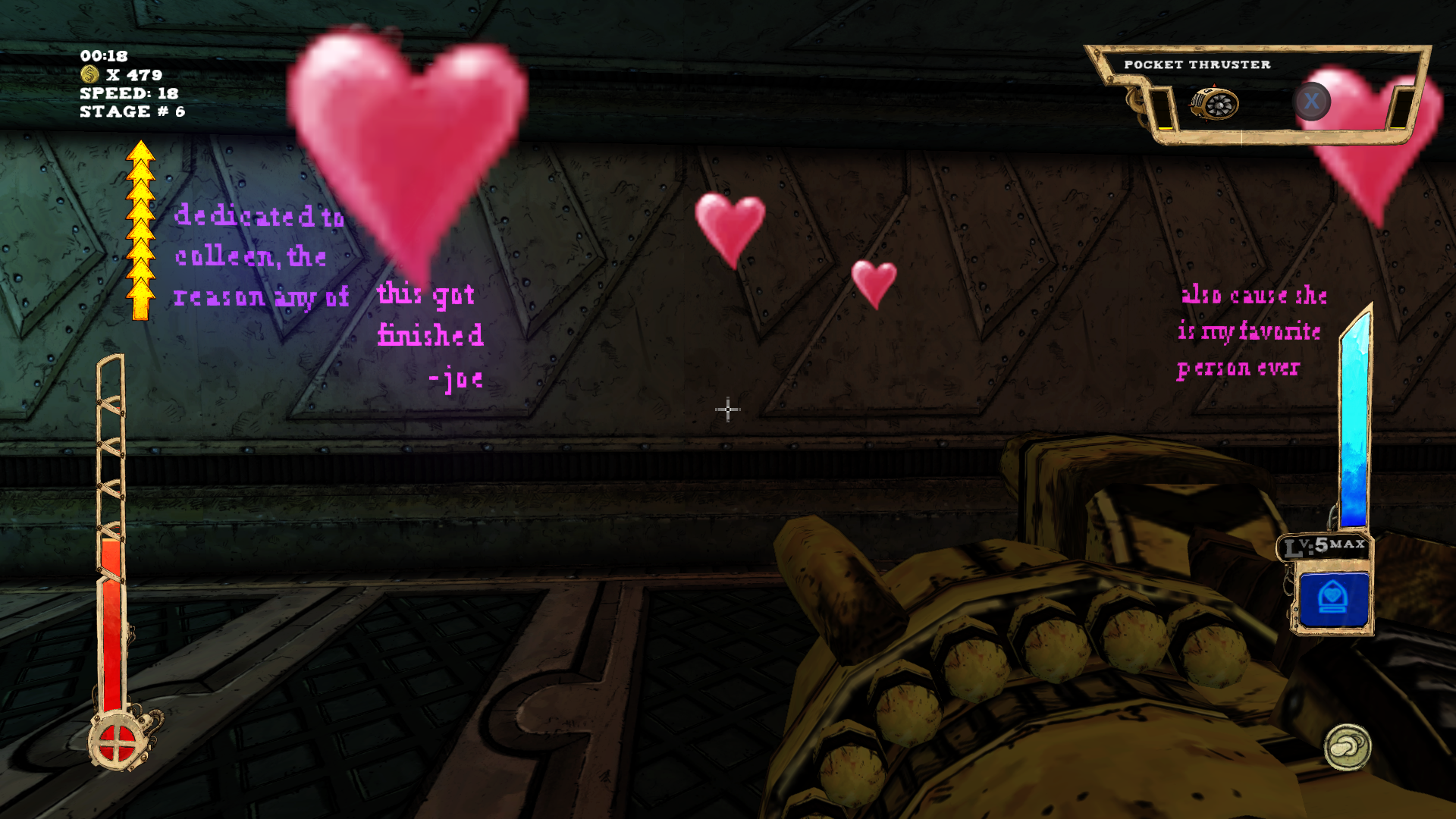 Awwwwwww….the heart melts.
The only real downsides are the lack of any type of multiplayer and not much story to go on at all. This game would be an absolute blast both locally and online. Although most games need a decent story, I can’t really say it makes a difference here. The game is so fun and addicting, you feel engaged in the experience without a story to get your teeth sunk into.
Moving on to the achievements the list is made of 12 achievements, all of which are easily obtainable with a little bit of practice for all skill levels. You’ll need to complete 100 runs through the tower in any mode and unlock all guns and perks. All the miscellaneous achievements will most likely be grabbed whilst unlocking the guns and perks. All in all, a pretty straightforward list.
After my time with Tower of Guns, I really am struggling to find anything inherently wrong with it. Yes, it could do with some aspect of a multiplayer and the story is non-existent but it’s fun, engaging and whilst frustrating at times, it gives you that little bit of a helping hand to get your luck going in the right direction. With the endless and dice modes, you have hours and hours of bullet dodging, quadruple jumping carnage. I thoroughly enjoyed my experience and after I unlock my final gun I have no doubt I’ll be coming back from time to time just for the fun of it.
PROS:
1) Massive replayability
2) Immensely fun
3) Secret areas are genius