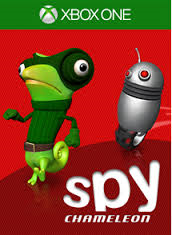 Unfinished Pixel’s first foray into the magical world of the Xbox One comes in the form of Spy Chameleon, an action-puzzler. You play as an undercover RGB agent whose goal is to complete each mission without being detected. As far as any story goes, that is pretty much it, but it doesn’t really take anything away from the game.

Spy Chameleon tasks you with completing 5 missions, each with 15 levels. Each level has 3 challenges to complete. A par time to beat, 10 flies to collect and finding all the ladybugs in that level (anywhere from 1 to 3 per level). There aren’t many levels where you will be able to complete all 3 challenges in 1 run, so you will be replaying levels a lot if you want to nab all the challenges.

During the missions, you will need to avoid detection from CCTV, Robot Sentries, Rats and others by using the environment as cover from their field of vision. To successfully navigate through each level you quite often need to make use of your camouflage ability. Each colour is represented by the corresponding colour on the controller so Y is Yellow, X is Blue etc, which works really well. For example, if there is a tin of green paint spilt on the floor you can use your green camouflage to disappear from the enemies field of vision. 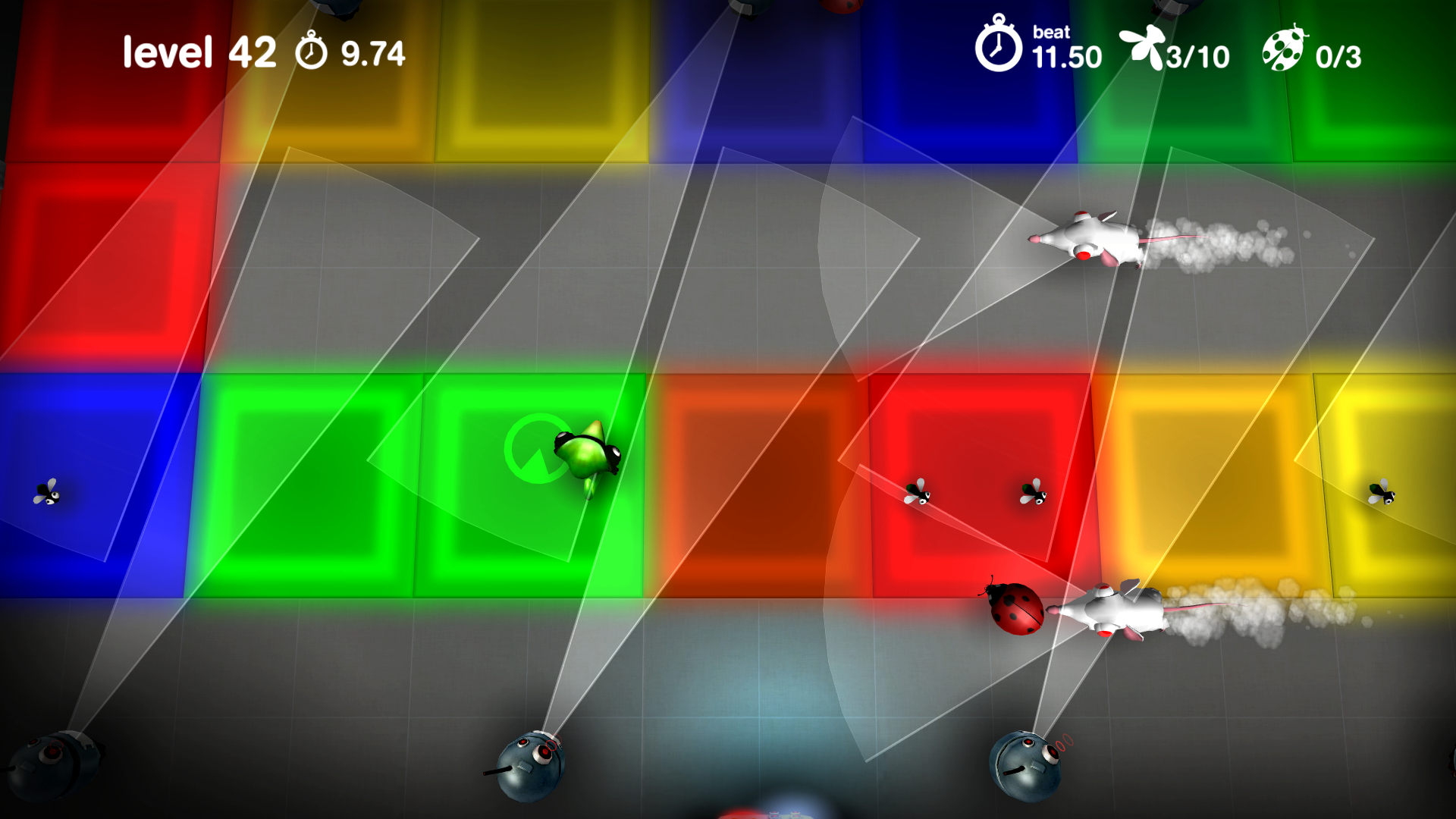 Spy Chameleon does a great job at introducing you to new puzzle mechanics and I never really got bored of doing the same thing over and over because there was plenty of variety going on. The flip side of this though is the difficulty seemed to fluctuate throughout the missions due to the tutorial levels for each new mechanic being introduced.

I found a handful of levels really required pin point accuracy and timing to beat the par time, but for the most part you are given plenty of breathing room. For a puzzle game I would say the frustration level stays pretty low throughout, which was a nice change of pace for me. 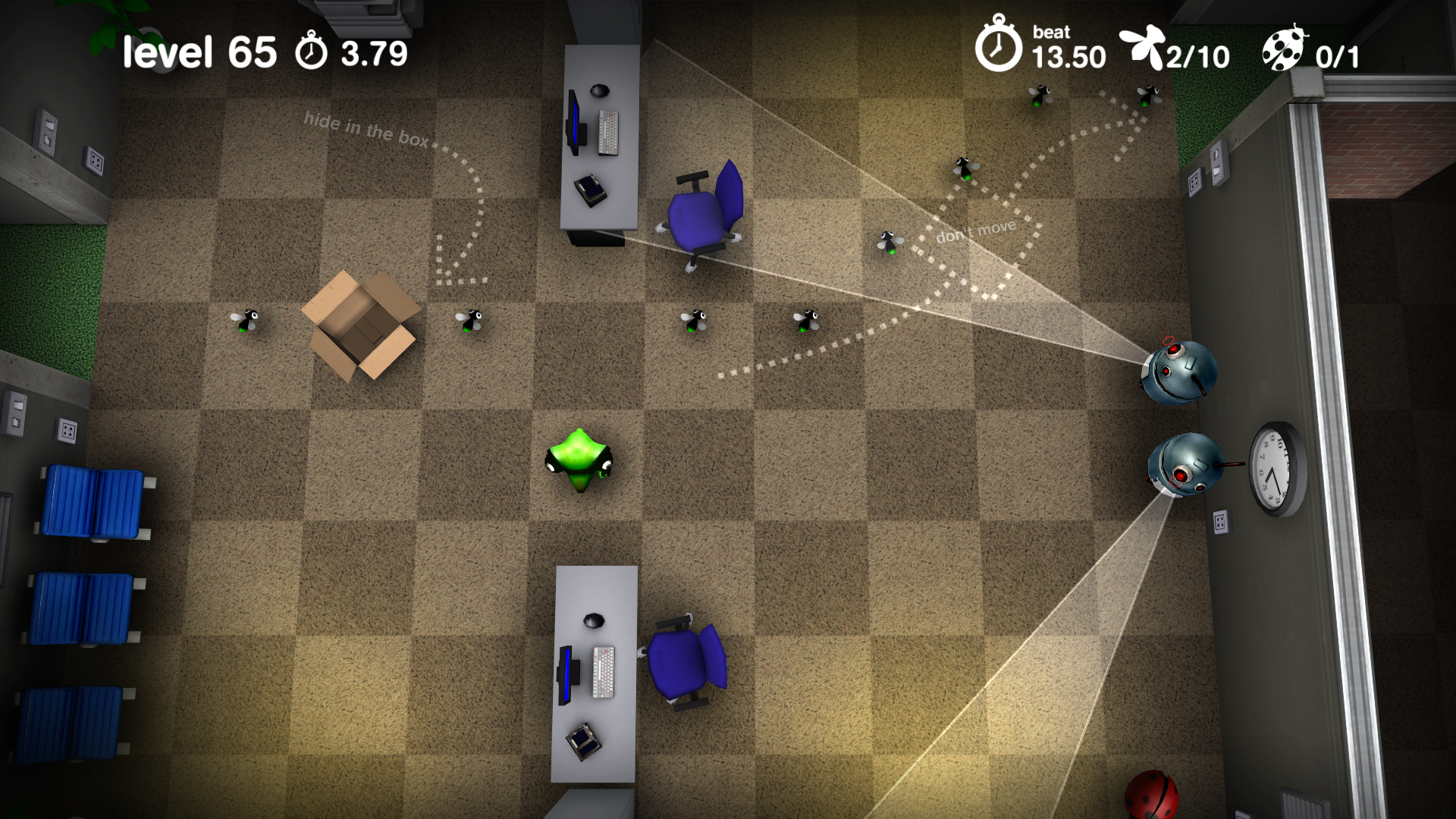 Towards the end of the game and not exactly a challenge.

Unfortunately, not everything is as enjoyable as the puzzles in Spy Chameleon. A few nights back I was playing for about an hour and a half and progressed to level 58. When I came back the next day to carry on my progress I had been reset to level 8. None of my stats were saved and I had 40 levels to redo. I’m not 100% certain what caused the reset, but I have seen others mention it when putting their Xbox One in sleep mode. So anyone wanting to play Spy Chameleon, be aware that you could lose progress if you’re not careful.

Something I really like about Spy Chameleon is the achievement list. It’s pretty uncommon for an Indie Developer to include a good achievement list. You’ve got your standard game progression achievements, a handful of random tasks to do like annoying the same fish 25 times and some skill based ones too for completing all challenges on Hard mode and finishing all 75 levels in under 18 minutes (I’m currently at just over 20 minutes). The par time for level 18 is currently incorrect and although it can be done with the incorrect par time, the Developers are aware of the issue and a patch is in the works.

Spy Chameleon does a lot of things right. The controls are on point, the puzzles aren’t frustratingly difficult or fiddly and it was thoroughly enjoyable. The fluctuating difficulty did catch me off guard a few times but it’s not a deal breaker. Apart from the loss of progress, I had a blast playing Spy Chameleon and Unfinished Pixel got the pricing point spot on.