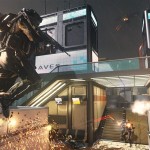 So for Advanced Warfare I want to get to max prestige. I am actually racing a friend of mine to 16. My plan is to kind of challenge myself each Prestige with a goal. Prestige 1 I wanted to Diamond Camo a gun which I will talk about below and then so on. After the first 2 I’ll open it up to you guys as to what I should try to accomplish. Nothing crazy like launchers only because I do have to do it for 50 levels!

So I started Day Zero at noon and was Prestige 1 just after midnight. Just under 9 hours of gameplay. Took a few breaks and ate dinner with the family but this was Call of Duty day! I wanted to get diamond with the starting gun the Bal-27 hoping that all camo just meant level one of the camos. It did not. So there was no way I could get 500 longshots and 500 headshots when I was going up a level every single game. Also the Triple Kills are just plain stupid. They have to be extremely fast to count. I ended up with 1. Despite many many many 3 kills in a row, only once was it fast enough for it to count as a Triple Kill. I did get my 50 strafes and 50 dodges. Which pretty much go hand in hand. Also with the Royalty requiring ALL camos for the entire series of guns I wish they had done it Black Ops style where you kept your challenges. With Double XP the entire day it took me 54 games to Prestige.

So each Prestige you get to keep 1 item as a permanent unlock. I choose the Crossbow since it’s a very late level item (48) and I am a huge Direct Impact fan. My goal here is to maximize my DIs. This Prestige should take almost double the time since it’s won’t be 100% double xp so my goal is 100 DIs. Going to go Camo Exo to camp a little and sneak up for the Direct Impacts.