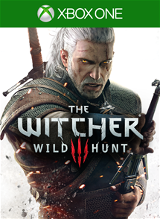 Witcher 3 is a 3rd person action RPG from CD Projekt RED. In The Witcher 3: Wild Hunt you play Geralt a Witcher. This means it’s your job to hunt down rare and dangerous monsters in the world, well at least as long as someone is paying you to do it.

If you are a true completionist then prepare for the long haul. Ideally you already live in your mom’s basement and she is willing to bring you Funyuns on a moments notice because this game is PACKED. It’s hard to describe the shear scope of the game. Games keep talking about making bigger and bigger maps but then they fail to fill them with anything enjoyable to do. Not so with The Witcher 3. There are quests and activities in every nook and cranny of this game. I’m 67 hours into it and not only am I not getting bored but I don’t even feel like I’m halfway done. These are not just go fetch me a crate quests, everything has cutscenes and decisions and you feel like what you did before this moment has helped define what you are doing now and why you are doing it. 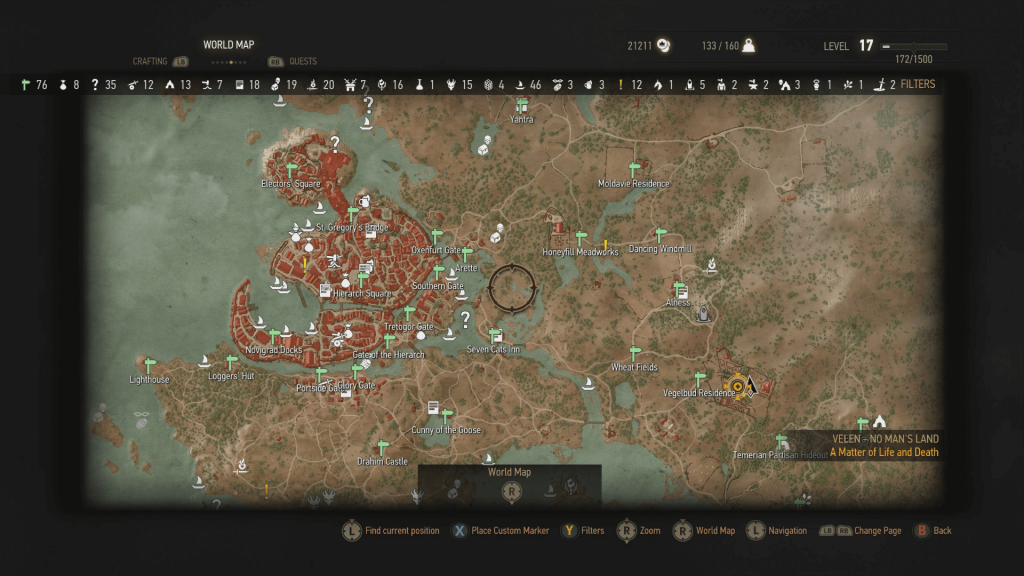 Just a small portion of one of the maps

The combat is very satisfying and very much skill based. Every creature has very specific attacks, defenses and weaknesses. It’s extremely important to make use of all your abilities and a player who is familiar with dodging and parrying during combat can defeat a much higher level opponent through pure skill. Although a monster may be able to 1 hit kill you, the fact that if you use the right equipment with the right Signs you could still win that battle and I really enjoy that aspect of trying to take on a really hard fight and managing to win.

Let’s talk about everything you have at your disposal during a battle. You have 2 swords, one for humans and one for monsters. You have five magical abilities, your Signs, and for me two of these really stood out as amazing. Igni, which is your fire attack, is amazing in battle against 90% of enemies. Burn damage is massive and it creates a stagger effect on enemies allowing you to add on attacks. The other beast Sign is Axii. This is a mind attack. On basic monsters and humans you can stun them in place or even convince them to attack their friends. Against monsters it’s a nice slow down effect. The remaining three are Quen, a shield, Aard, a telekinetic blast and Yrden a trap spell. They all have their places in the game and all are useful. 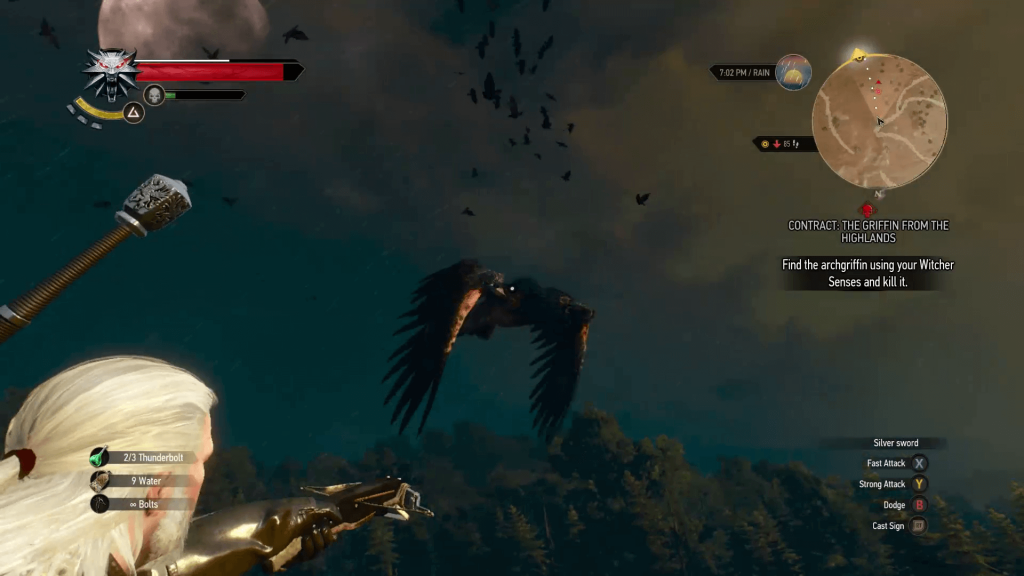 Toe to toe with a Griffin

This leads us to Alchemy. Alchemy brings us bombs to throw, potions to take, oils to add to your swords for bonuses and decoctions which are monster specific bonuses. The Alchemy system is both a strength and a weakness. I applaud them for creating this entire system of bonus potions and oils but it’s almost too complex. I fight my first Griffin and get a Alchemy item that allows me to create a potion so that the next time I fight a Griffin I’ll have a little bit of an advantage. They vary but usually something like I do 10% more damage to Griffins. That sounds great doesn’t it! The problem is I also have to find the recipe to actually make the potion, and then I need to find the rest of the ingredients that will make the potion. Then I need to actually find another Griffin to fight and make sure I apply the potion and the oil and the decotition and it just becomes a LOT of work for a minor bonus. I could spend hours getting all the parts and making the items and only ever fight 1 more Griffin the entire game.

On the flip side, if I really want to do all that Alchemy work then the Skills Tree just adds and adds and adds bonuses. There is a skill called Refreshment that at max skill level heals 25% of HP on each potion use. So not only get the potion’s benefits, but also do a major heal. There are a load of skills that do a load of great things. But don’t think you are just going to get every skill and be a god among men. First off you get 1 skill point per level and levels do not come easy. Experience is really earned in the Witcher 3 and it take a lot of time to develop your character. Then there is the fact that abilities are only helping you if you place them in active slots on your character of which there are only a few places.

So you’ve made all these potions and just used them in battle against a Rock Golem. Do we have to search the land for more ingredients to replenish our stock? NO. You Meditate. When you meditate in Witcher 3: Wild Hunt you replenish all your bombs, potions, etc (and heal on anything but the highest difficulty) for the cost of just 1 alcohol. Yes, if you have a beer in your inventory when you Meditate you get everything back. 1 beer equals 3 bombs, 2 potions and whatever else you used up to this point. It’s a pretty big stretch immersion wise and meditate’s story problems don’t stop there. The process is, Geralt sits down wherever he might be and you select how much time will pass. Meditate is also used to speed up time if you need to meet someone at a specific time. Like it’s mid morning and your contact only shows up at Midnight. So I select 6 hours to pass. As I sit down there is a dwarf walking in front of me. Now I get up 6 in-game hours later and that dwarf is exactly where he was when I sat down right in stride. NPCs that would arrive or leave during that time do so, but anyone who is valid for the full range doesn’t appear to have passed any time at all. Just a immersion problem. 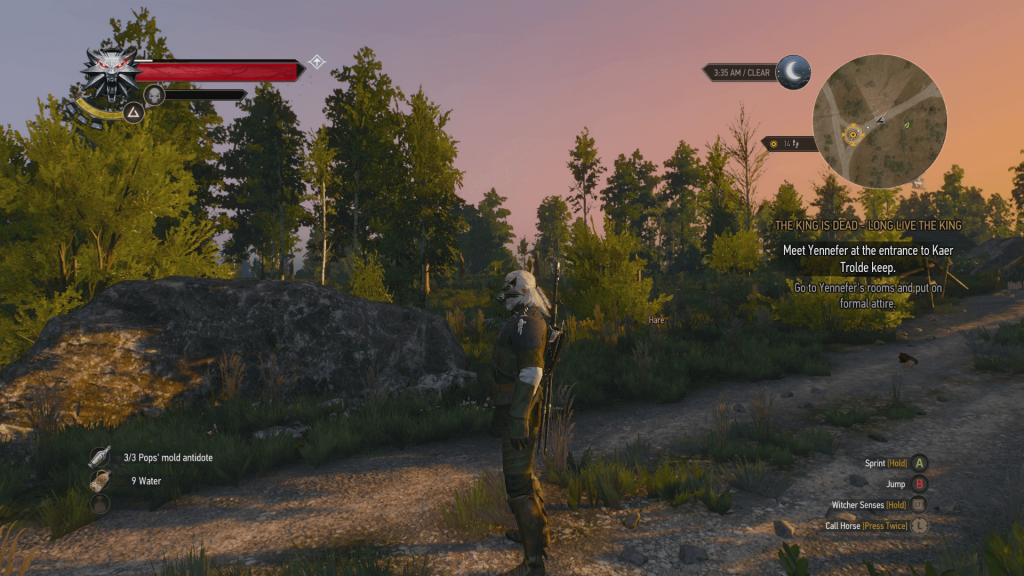 There is a full card game to play also called Gwent. Apparently its only the rage with merchants and traders as they are willing to play with you but no one on the street seems interested. It’s a valid sales strategy that they are willing to demo a game they want to sell you cards for but it’s reach so far appears to be Barons and Witchers. It’s a fun little game that carries the major problem with any game made to be simple. There is no cost to play a card so the game is just about getting the best, most powerful cards which in itself is probably the longest and most time consuming quest in the game.

The problems on the Witcher 3 are minor annoyances that really only come up because the game is so huge you are bound to find things that just don’t feel right to you. Swimming in 3rd person games is one of my top pet peeves in the world and Geralt is just as bad a swimmer as every other game in the history of the world. Getting out of the water is a insanely frustrating exercise where you the player are trying to figure out what 1×1 pixel on the shoreline that CD Projekt RED wants you to get out at.

Overall CD Projekt RED has made an amazing game where even a straight main quest only playthrough is going to net you a LOT of content. Try to take in everything, and that time played counter is going to skyrocket. All of the game’s issues are cosmetic and Witcher 3 has one of the most advanced and varied combat systems I’ve played in a while.

PROS:
1) So much to do
2) Great varied combat
3) Great story, great acting

CONS:
1) Swimming
2) Mediate as a game mechanic seems not quite done