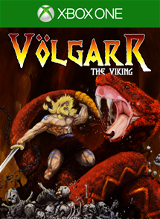 Volgarr the Viking is an old-school action sidescrolling beat ‘em up that is built to be a reminder of what arcade games used to be. The gameplay, difficulty, and graphics make the game look and feel like it could have easily sucked up your hard earned quarters and sat right next to Golden Axe, The Simpsons, The Turtles and more in the early 90’s. Every aspect of the game is a tribute to those arcade classics—nothing more so than the difficulty. Volgarr the Viking was developed by Crazy Viking Studios. It’s a kickstarted game which was initially released on Steam. After success on the PC, Volgarr has moved to the home console and is ready to make you scream and cry. Are they screams of delight and tears of joy? Or is it more agony and suffering?

As mentioned before, the difficulty level of Volgarr the Viking is its foundation. The design of the enemies, levels, and gameplay all revolve making the game painstakingly difficult. You play as Volgarr. You wield a sword and a spear. The sword works well at close range and the spear is used for ranged attacks. The spear is also used as a platform. Volgarr can throw a spear into the wall and use it to jump up to higher places. Just a few hits can kill Volgarr. In each level there are treasure chests that give upgrades. A shield can block projectiles; a fire sword gives more range and more powerful hits. If Volgarr takes a hit, he loses an upgrade. Enemies are all designed in different ways. Spiders jump forward and are difficult to attack from close range, but they are too short for a spear at long range (as it goes flying over their head). Skeletons hold shields that block spears and high attacks, so the only effective attack is ducking down and hitting them low. Meanwhile zombies take one hit to kill them, but if you hit them down low the split in half and the top of the body falls forward and can damage Volgarr. Every enemy must be learned—which is another way of saying you will die a hundred times before you figure it all out.

At first this is extremely frustrating, welcome to old-school gaming. Each level took me anywhere from one to two hours to complete. However this is where the game nails the old-school feel and delivers on the mechanics it strove for. Because after exhausting so much time, effort, and skill into each level I can complete them in as little as five minutes. First I needed to learn all the ins and outs of each enemy and the levels itself and after the seemingly torturous discovering process I’m able to fly through with relative ease. Gameplay like this was a stable in classic gaming and really hasn’t snuck its way into modern gaming. In most games today, enemies have a health meter, levels are designed to help the player move through safely, and normally the real challenge comes with just the number of enemies on screen or maybe the strength of a boss battle. It’s entirely possible to play through whole levels of games today without dying at all. And checkpoints are thrown around like contraceptives at college orientation. In Volgarr the Viking you get one checkpoint in every level. There’s a beginning, a checkpoint at the halfway mark, and a boss battle. Even the boss rooms don’t have checkpoints. This is something I do have to complain about. In a game like Megaman, it’s a relief to make it to the boss room because if you die there you can try again if you still have lives. In Volgarr the Viking, you have to play through the entire second section of the level again, because you will come back right at the checkpoint again. The bosses are just like the levels, it takes some time to learn how to defeat it. So getting thrown all the way back to the checkpoint is very painful.
The graphics are impressive for what Crazy Viking Studios was going for. It looks very much like a game from the late 80’s early 90’s. The main problem is that there isn’t really anything that gives it its own unique feel. In other words, if Volgarr was a game from the arcades back in the day, it wouldn’t be remembered for its visual fidelity at all, as the characters and levels aren’t anything special. The levels vary and have their own style. The enemies look fine in each level. But the enemy originality is nothing special. The water level has frogs and oysters. The jungle level has lizards and snakes. The music is strange. At some points it sounds good, at other points it’s almost painful. The biggest problem is that it just doesn’t fit with the game’s art and design. The gameplay feels old-school. The graphics look old-school. The music just isn’t. I expected some sweet 16-bit goodness to pleasure my ears. Instead I got some weird pseudo-atmospheric generic songs that have no memorable values. If you’re going to make a game that beckons game to the classic days of arcade gaming, you need to go all out in every aspect.

One of the biggest frustrations to the game is the saves. After beating a level you are supposed to be able to skip that level in the future if you choose by walking backwards from the spawn point of every level. However this just doesn’t work for a large majority of the players who picked up the game. When the game was initially launched on the PC it didn’t even have this option. The only way to beat the game was to play all the way through nonstop. So maybe we shouldn’t complain so much because this option was a gift from the developer’s right? Wrong! Even though it’s something that they threw in to lighten the blow, it’s still something that is supposed to be in the game that just doesn’t work. Playing through every level straight-through is semi-ludicrous. Once you’ve beaten the level a dozen times, you shouldn’t have to much trouble beating it again. But there are six standard levels and six more secret levels, so beating them all the way through will take an extremely long time. After completing a level I felt exhausted and wanted to just save and come back later, but I couldn’t.

Volgarr the Viking is a good game. It’s extremely difficult, but in a fair way that is challenging instead of just unnecessarily cruel. If it takes an hour to beat a level the first time or two, but just a few minutes to beat it after that, then you’ve got a game that is tough in the right ways, just like the best brutal games of old. It teaches you how to defeat the game through the games difficulty itself. The gameplay and art would be right at home in the Penny Arcade in my local mall twenty years ago. Sadly the music can pull you out of that experience. However if Volgarr the Viking was in those arcades it might not be remembered today. I just don’t feel like it has its own unique place in that arcade world. A game like Shovel Knight, which was released earlier this year, manages to borrow from classic NES era games just like Volgarr borrows from classic arcade games. However Shovel Knight does two things that Volgarr does not. Firstly it never breaks from being a 100% NES old-school type game. From start to finish Shovel Knight is an old school game; gameplay, music, graphics, feel , everything. And secondly, more importantly perhaps, Shovel Knight borrows from the NES epoch but STILL manages to create its own special distinctive experience. If Shovel Knight was a game created in 1988 for the NES it would still be remembered today as one of the greats. Volgarr doesn’t have that distinctive feel, that thing that sets it apart and allows it to be its own extraordinary game. If you want a new game that delivers on the same exact hardcore experience that graced the screens of arcade monitors in the early 90’s then Volgarr the Viking will not disappoint. Just don’t expect a game that will blow your mind with new creative experiences in an old school skin and feel. But…. do purchase a few new controllers because you may break a few in anger at some point.

PROS:
1) Difficult and challenging in the right ways
2) Arcade feel