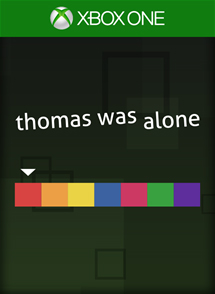 Thomas was alone… what a strange title for a video game. When I first heard this name, I instantly assumed it was an indie game, which I often truly enjoy. And on top of that, I thought it was probably an exploration game. I thought of Journey. Or maybe a first-person exploration game like the upcoming “Everyone’s Gone to Rapture”. I certainly wasn’t thinking about a narrative side-scrolling platforming puzzle game with rectangles. But that’s exactly what Thomas was alone is. It’s a puzzle game with clever ideas, but not enough substance.

The basic explanation of the game is that there are multiple different rectangles that you can control. At first you just start out with one, and the goal is to get to the end of the level. About every five levels the game introduces another rectangle to the mix. Each rectangle is different in color and size. The player controls the rectangles like a platformer, pressing a button to switch between each rectangle on the fly. Each rectangle moves at different speeds and jumps at different heights. In the world the only pitfalls are things like water and spikes.

The first three rectangles don’t vary enough. They are just different sizes and height which makes for some very boring puzzles. Early on the answers to the puzzles were all far too similar. One rectangle can jump extremely high; the other can barely jump at all. So use the one rectangle as a stepping stool and the short rectangle jumps slowly up like a staircase. It’s boring and not creative at all. Eventually there are more rectangles that join the party and they switch things up much more. There’s a HUGE rectangle that can float and be like a boat for the others. And there’s another long flat rectangle that acts like a trampoline and launches the others in the air. The puzzles get slightly more interesting once these rectangles come into fruition.

Now strangely enough, each rectangle has a name and personality. This is where one of my major complaints comes into play. I love character driven games. I love a game that has personality. I love dialog between characters and character development. And Thomas is Alone tackles a lot of these ideas. However I believe they fall very short. The characters in this game are little rectangles. That’s right, the rectangles that you use to jump around and float and climb are actually characters in the game. Yet they have no faces, no expression, no voice, nothing that helps them stand out other than their size and color. Thomas is red, Chris is short and orange, John is tall and yellow, Claire is big and blue, and so on and so forth. These characters are developed and have personality, but for me, it was so hard to let these little rectangles effect me emotionally in any way. Think of the game “Threes”. It‘s a simple card puzzle game based on numbers. If Threes could have existed before video games, it would be similar to Sudoku, with just simple numbers. Numbers are just numbers; they have no life at all. But since Threes is a video game, it can do much more. In a simple yet brilliant design move, each of the numbers in Threes has a face, voice, expression, and character. It’s a small touch. But when you create the number 48 and it’s a little bucktoothed face that says, “Hey Guys!” it instantly make the game have so much more emotion and life. I laugh every time I can’t figure out my next move and I hear one of them sigh and say, “I’m booored”. Why couldn’t Thomas was Alone have this type of detail? Thomas is supposed to be a light-hearted rectangle who just wants friends. And Chris is kind of a jerk who doesn’t like anyone at first. So how about giving Thomas a happy go lucky grin and as he moves along why can’t Chris squint his eyes and look at him with disdain as he jumps over his head? I know we can use our imagination. But this is a video game. The possibilities are endless. Don’t restrict the game in such a way that it takes away from the experience. I know that the developer put time and effort into wanting to create characters that developed and grew on each other as time went by. And this could have been pulled off so much better if these little guys weren’t simply quadrilaterals without a face.

The way that the story told is through a narrator. The narrator talks for the characters themselves, knowing their feelings and thoughts. The characters never talk to one another. This I don’t have a problem with, I like this move. Let’s say in this world that these little rectangles can’t talk, but they still have motives, thoughts, ideas, and emotions. I would have liked it if we could just see these emotions. It’s hard to really care about anyone when they are just shapes with colors. Plus, the narrator in my opinion gets extremely irritating. He’s a British narrator, and when he just talks normally it sounds fine. But when he tries to be funny, by changing the complexion of his voice or talking fast or things like that, he sounds extremely annoying and not funny at all. I would have preferred if the game was entirely in text over hearing the narrator’s aggravating voice.

The puzzles themselves are far too easy in the early goings. Until “Claire” is introduced, the game is entirely about jumping and climbing only. And Claire manages to change that just slightly, as now the game is more jumping and climbing, just with Claire’s floating ability thrown in there. The puzzles’ difficulty does heighten to some degree with the trampoline rectangle, Laura. But the game just takes too long to get interesting in its puzzles. And still, the puzzles are unexciting and not creative. The goal is always to just get to the end. And the way to get there always involved jumping on each other, pressing buttons, and not falling in water. There are a few levels that really take advantage of the different rectangles abilities and make for a bit of fun, but those levels are much too rare.

The graphics in Thomas is Alone are as simple as can be. I mentioned earlier about how I feel the characters could have used more personality, emotion, etc. The game is far too bland and lifeless. It’s really just a game with a bunch of squares and rectangles; it looks like an unfinished prototype.

Overall Thomas is Alone is a game that disappoints me on multiple levels. It’s visually ugly, the narrator is obnoxious, and the level design is uninspired. I want to care about the story and the characters, but the way the story is presented and the fact that the main characters are emotionless rectangles makes it just so hard to stay invested. Thomas should have stayed alone, away from the consumer, until the game was much more polished and filled with more life, meaning, and personality.