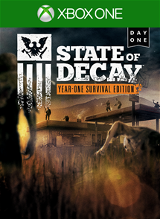 State of Decay is a 3rd Person Zombie Survival game developed by Undead Labs and published by Microsoft. It was first released on the 360 in 2013 and this re-release on the ONE adds both DLCs and some next gen improvements which include the typical visual upgrades (draw distance has been greatly improved), a new character, and weapon add-ons.

This game is more than just basic individual survival. You are in charge of a whole group of survivors. You pick where the group will live. You decide between updating the medical facilities versus creating more beds for survivors. You send them out on mini missions to gather supplies and you are constantly working to make sure the base is secure from zombie attacks.

These decisions are huge in the opening part of the game where you are just trying to maintain order and keep people alive. As things progress, and you provide better weapons and facilities, the base tends to run itself pretty well. By the end game I just completely ignored all requests. Oh no, Billy is sad? Well its the zombie apocalypse so let’s just man up Billy. Oh you think you might want to leave my heavily guarded base with its top notch medical equipment and comfy beds to go sleep in an abandoned gas station? Don’t let our nice protective fence hit you in the butt on your way out. 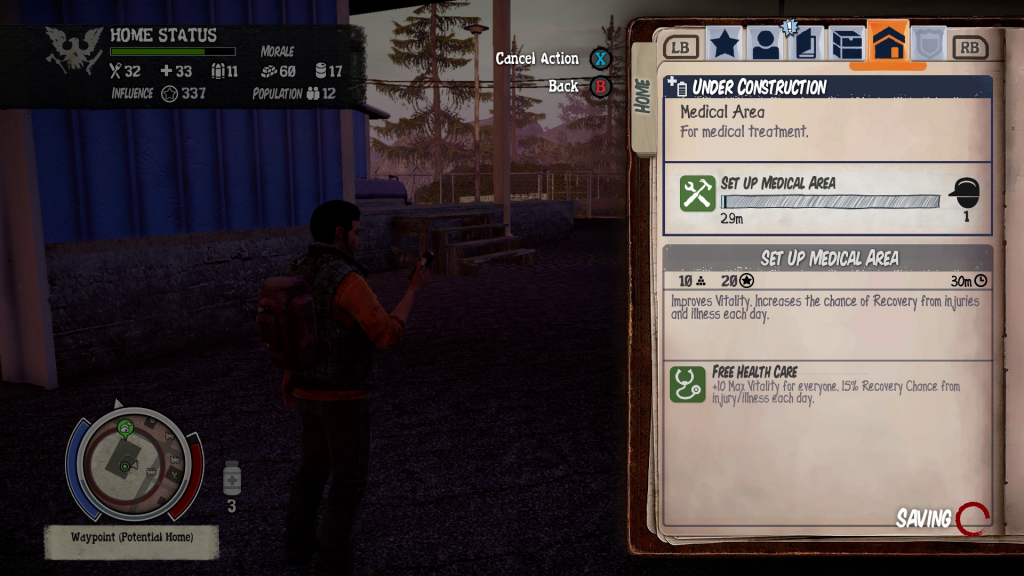 Setting up a new base

This complete lack of empathy on my part for Billy’s cry baby attitude isn’t the game’s fault. It’s actually the opposite. If I hadn’t worked my hard creating this zombie free oasis then I’d be a slave to every little request or risk losing it all. But I built something nice in a sea of despair so I have a lot of leeway in my choices now and Billy can man up or get out.

On the zombie realism scale State of Decay is firmly on the realistic side. You know, for a game involving zombies. You won’t be taking your double ended chainsaw into a sea of 600 zombies and coming out on top. In State of Decay you’re going to be taking your Wooden Table Leg at 2 zombies and even then you’ll be worried. If it turns into a pack and I made some bad decisions regarding transportation and weapon selection well then I might just be dead. And in State of Decay death is permanent. That character you spent hours getting to top level. DEAD. No reload save, he’s just dead. Time to move on to another character. You are allowed to switch between survivors but I’ve always preferred to have one super amazing zombie destroyer character than 3 or 4 average joes. So keeping that one amazing guy alive is priority number one. 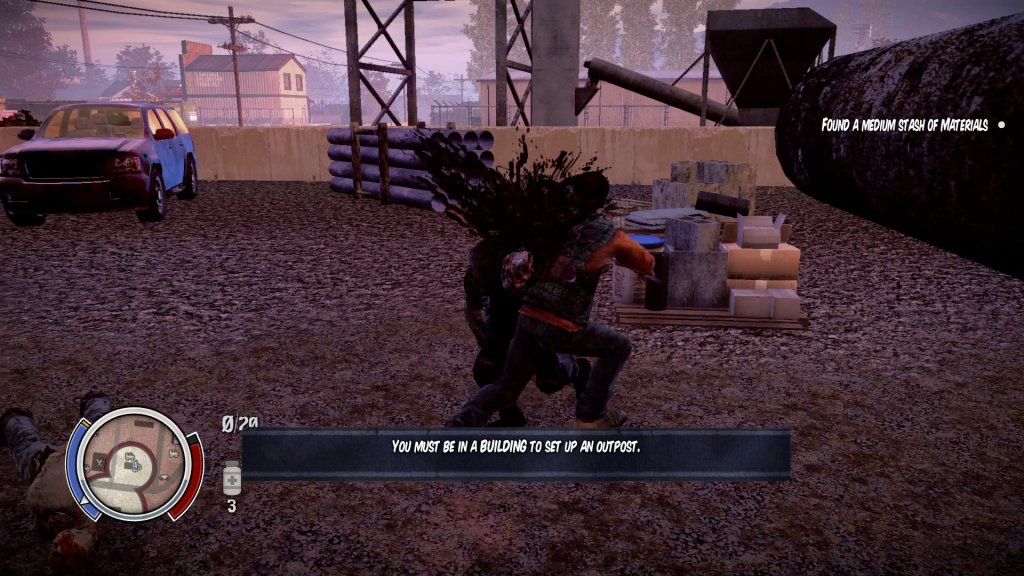 In order to promote you using a larger selection of characters, as you use your main guy for an extended length of time he will start to get tired. He’ll temporarily lose Stamina. And let me tell you, Stamina is everything in State of Decay. It determines how far you can run and how many swings of that Wooden Table Leg you get before you’ll just be standing there gasping for air while zombies eat your face. When your character gets tired you have a few options; drugs will give you a temp boost to keep you going, you can switch to another survivor or as I like to do, it’s time to take a break. The game continues even when you are not playing. People will still go out looking for supplies, things continue without you. Your characters will heal, your vehicles will get repaired (as long as you have Parking Spots and a Workshop that is). I’ve never had anyone killed or leave while I wasn’t playing but it is a possibility.

There is a overall story. It’s not the best but it’s definitely serviceable. There are a few intertwining story lines. Different groups of survivors that you need to help or ignore. The army is in there doing things too, some good, some bad. The story just seems incomplete though. For example there is a story line with a guy who says he can get things and do things and you help him once and then there just isn’t anything more to it. It just peters out. There are a group of survivors that are definitely the bad guys. That story line just kind of ends also. If you decide they are evil your only option is to just ignore them. There’s no way to retaliate or really get any closure. The voice acting is top notch and what there is of story is put together very well it’s just that they could of done so much more.

My biggest issue with State of Decay is that in the 2 years since it’s launch on the 360 they don’t seem to have fixed a whole lot. The worst offenders are the fact that your car will launch about 100 feet into the air if you even touch a small rock, which in turn sends you on a orbit that closely resembles that of a small satellite. This series of tragic events seems to always land me in some small crevice that my buff survivor has no way of getting out of. He can wall climb a cliff that is 3 feet taller than him but a small incline is just pure death. You lack any real calf definition apparently. Poor workout decisions. 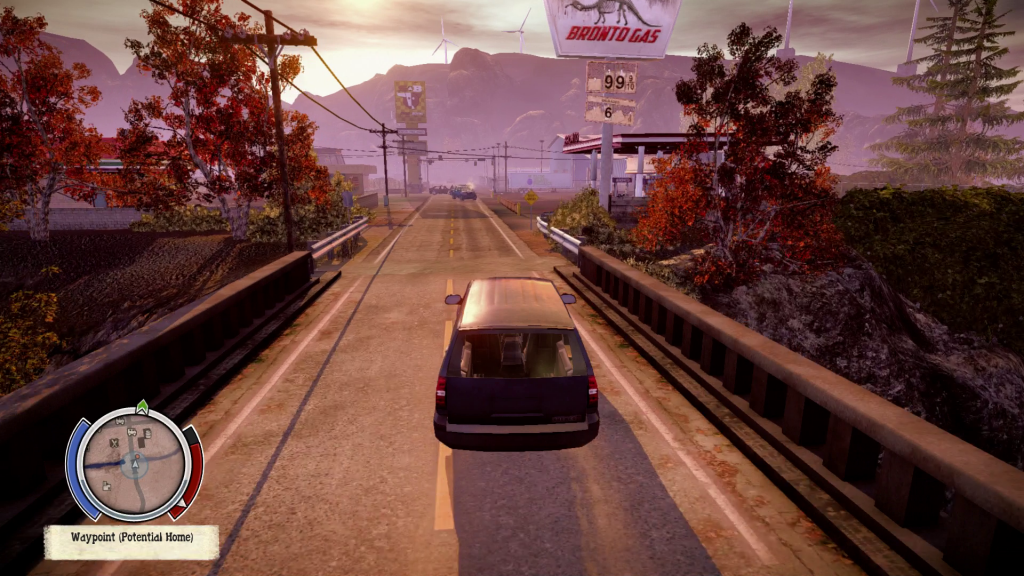 Vehicles aka the best weapon

When I was nearing the end of the game you open up a new area. I wasn’t in the mood to move the whole clan over so I found a nice truck and loaded it with supplies (adding vehicle storage was one of the ONE improvements), took a few hits but I loaded up for a long winter. Saw a helicopter with some supplies and the coast looked clear so I drove near AND BAM caught permanently under a helicopter propeller. Dashboard and try again.

The other main distraction is the fun little game of hide and seek I seem to always be playing with the last zed in an area. They are worse than rats as they worm their way into the geometry of the house and just sit there hissing at me mocking my inability to hit them in the face with my Fire Axe. This didn’t show up very often, but when it did my most successful option was to dashboard and come back and try again.

The DLC consists of a completely separate campaign (Lifeline) which is about half the size of the main game putting it at like 5 hours or so. And then there is Breakdown. Breakdown is Groundhog Day for Zombies. You work through challenges and getting survivors to a RV and then PFFT! you are right back where you started only the difficulty ramps up.

Overall State of Decay is a great game where the pluses far outweigh the minuses. The simming aspect of creating and maintaining the base adds a lot of interesting choices and the perma-death scare keeps you on your toes. I’m not a stacker type of player so if you’ve played the 360 version I don’t think there is enough new and changed to warrant the price tag unless State of Decay is one of your top games of all time and if that’s the case you probably aren’t bothering to read this review, you’re playing State of Decay right now.