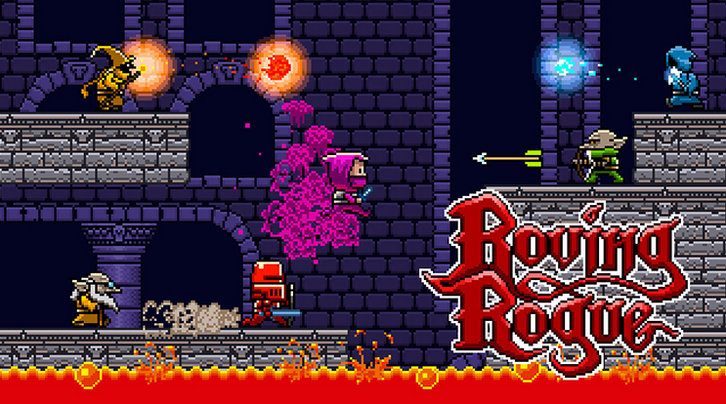 Roving Rogue is a 2D platformer designed to look and play like games from the golden-age of gaming. Developer Padaone Games endeavors to create a game with 42 frantic levels, a story interestingly told backwards, and simple yet deep mechanics. There’s tons of attempted humor, a classic art style, and a fascinating platforming tool. With indie games in a renaissance and kickstarted games taking over, classic throwback 8-bit and 16-bit games are suddenly flooding the market. Standing out as a truly special game is difficult. For every Shovel Knight, one of the best games of the last decade, there are hundreds of shovelware piles of crap that are reminiscent of why the video game industry crashed back in 1983. Sadly for Padaone Games, Roving Rogue definitely falls closer to the shovelware category.

Roving Rogue’s story is funny and interesting for about 5 seconds. In the very first moment of the game, you will kill the final boss. From then on the game is actually played backwards; since the main character has lost his memory and needs to recount what actually happened. While there could have been so many amazing gameplay elements revolved around playing a story backwards, the game doesn’t take advantage of this. Levels still play the same way, enemies attack and the goal is to get to the finish line of the level. If the game didn’t tell me that I was starting in world 6 and the story didn’t tell me everything is backwards, I would have had no idea. The game also starts each level with text from different characters in the game. In this it seems Padaone wanted to build lore and add humor. Every single quote ends in a hashtag joke, but it gets old very quickly and with almost every #joke it is extremely obvious that they are #tryingtohard.

There are two huge problems with the gameplay of Roving Rogue. One is that the gameplay is extremely repetitive. In the game’s 42 levels it really doesn’t introduce anything knew. The second problem is that that aforementioned repetitive gameplay is borderline broken and just plain boring. It would be one thing if the game was repetitive but still fun. For example Temple Run was a huge success, Guitar Hero is another example. Those games are pretty darn repetitive, but it’s still full of a lot of enjoyment. Roving Rogue just isn’t fun. As I already mentioned, the gameplay is tedious and monotonous. There are new enemies and new levels, but they don’t add anything to the game. The enemies are not a threat at all; they slightly bump the player backwards a bit. Some have swords, some have arrows, some can levitate, but all of them are just minor annoyances in the way. In every level there is always an environmental hazard forcing the player to run to the exit. There’s lava, rocks, etc; the goal is always to get to the exit without letting those things catch up. There are also three collectables in each level. Actually managing to pick up those collectables is a real challenge, and sometimes they are positioned in places that are almost impossible. Sadly the reason they are so hard to get is not because of bad level design, although that is most certainly the case as well, it’s more because of bad and nearly broken platforming.

This broken platforming all has to do with the character’s special ability. He is a ninja of sorts, he can teleport; vanish and reappear to jump across pitfalls, make higher jumps, and dash throw objects. To pull this off I just had to press and hold the button, move the analog in one of eight different directions (North, Northeast, East, South East, and so on), and let go to disappear in a pink cloud of smoke and reappear at the requested destination. One major problem…. It just doesn’t work. Countless times I would attempt to point the teleport jump northeast, only to have the arrow move in a blink of an eye to the east instead, and I’d fall to my death. So many times I would CLEARLY set up to land perfectly on a platform, only to have my character mysteriously land multiple platforms below and completely miss the landing spot I was shooting for. The irritation and frustration kicked in very quickly. Everything revolves around these ninja teleports and it truly felt like half the time I attempted them the game would screw up and I’d land in a pit of lava. The gameplay just doesn’t need finished. The jumping is floaty and unnatural. The enemies are pointless. The level design feels like it is poorly procedurally generated as opposed to being put together brick by brick with purpose.

The graphics in Roving Rogue are awfully basic and lifeless. There are so many old 8-bit and 16-bit style games from the past that are gorgeous. There are also numerous brand new 8-bit and 16-bit games designed in this era, made to look like they are from the 80‘s and 90’s, that look stunning. Roving Rouge just looks dull. The color palette seems limited. The game is unimaginative and just kinda ugly. The sprites design, both enemies and playable characters, aren’t special in any way. The music is atrocious. It’s repetitive and quite painful to the ears. It’d probably be best to play the game on mute, if you choose to play it at all.

There is multiplayer in Roving Rogue, it’s simple but it could add some fun to the game. The only option in multiplayer is just to add another player, up to four, to the fold in the normal campaign. Rushing to the exit however, when the jumping and controls are already so busted, only makes beating the levels more obnoxiously difficult; not because of good game design, but because of lousy controls.