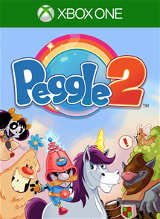 Peggle 2 is a puzzle game developed by Popcap studios. It’s the sequel to the inventive and successful Peggle released in 2007. The puzzle genre has been around for a very long time. There have been countless block breaking style games or Tetris clones or ball shooting puzzlers or match three games (sorry Candy Crush, you are far from pioneering). One of the cool things about Peggle is that the gameplay really is innovative. For a genre like puzzle games, that are some of the easiest to develop and are placed on any and every machine in the world that can handle them, it’s impressive the Popcap created something genuinely new and fun. Peggle 2 is tasked with taking what the first did right, adding new stuff, and hoping not to screw up something that is already such a huge hit. 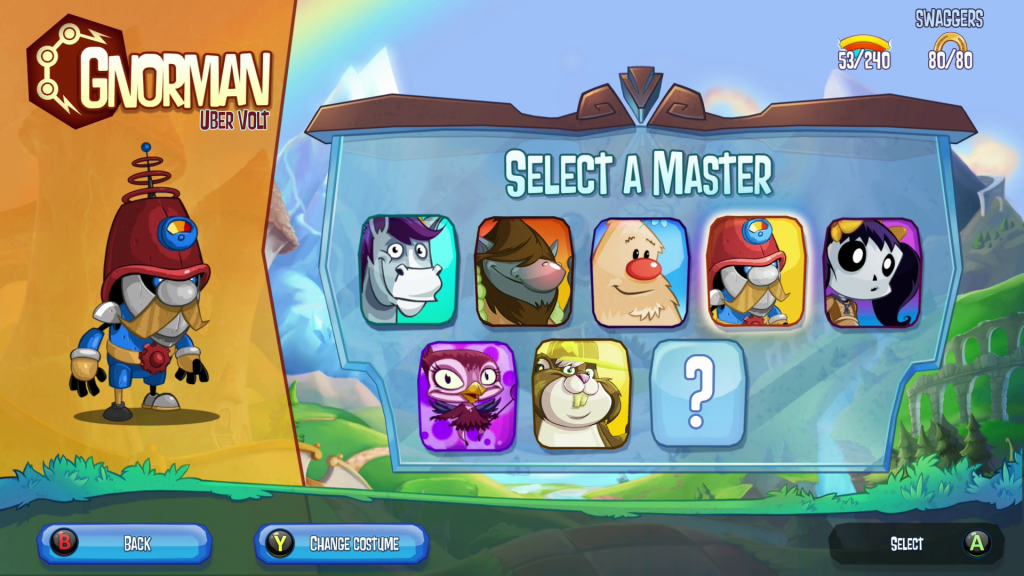 Peggle 2’s gameplay is the same as the first. You need to shoot a ball from the top of the screen and aim it to hit as many orange pegs as you can. Ten balls, so ten tries to take out every single orange peg. Luckily for the us players there are plenty of chances to get extra shots. Getting twenty-five thousand points in a single shot will give you an extra ball. If the ball fortunately lands in the moving bucket on the bottom of the screen the player will be rewarded with an extra shot as well. There are also many masters to choose from, each giving the player different powerups, called super shots, to help the cause. Bjorn’s magical unicorn powers allow for a super guide aimer to show exactly where the ball will bounce for three turns. Jeffrey the troll’s super shot will transform the ball into a giant boulder that will smash through every peg in the way. Each super shot is unique and provides a fun twist to the gameplay. The game’s art style is bursting with charm. If there was a camera recording my face the whole time (KINECT!) it would show me smiling nonstop (except in the moments of pure frustration). The music is also incredibly catchy and fun, with a few that don’t match up quite as well as to the others. Most of the songs are re-imagined and remixed versions of orchestrated classics like Morning Mood and Ode to Joy. They fit perfectly with Peggle 2’s colorful vibrant world. Months and months later some of the tunes still get stuck in my head. THAT BERG TRIAL SONG BRO!!!!!

The standard game takes you through ten levels for each of the five masters, with an additional ten for each DLC character (I’ve played two of them so far, the first was great and the second fell flat in my opinion). The basic game is fun and has decent difficulty. There are also three additional optional objectives for each level; this is where the real challenge is. There are also 10 trial levels for each master, and these range from super easy fun levels that show off the masters’ abilities in enjoyable ways to painfully difficult ones that ask you to beat the level without going over a certain score. There are two multiplayer functions in Peggle 2. There are basic leaderboards for high scores in each level. And there is Duel Mode. Duel Mode is a local or online head-to-head game mode that pits two players against each other on the same board, high score wins. It’s a fun game mode that has a lot of strategic elements because you want to get great shots yourself but also don’t want to set up high scoring shots for your opponent. 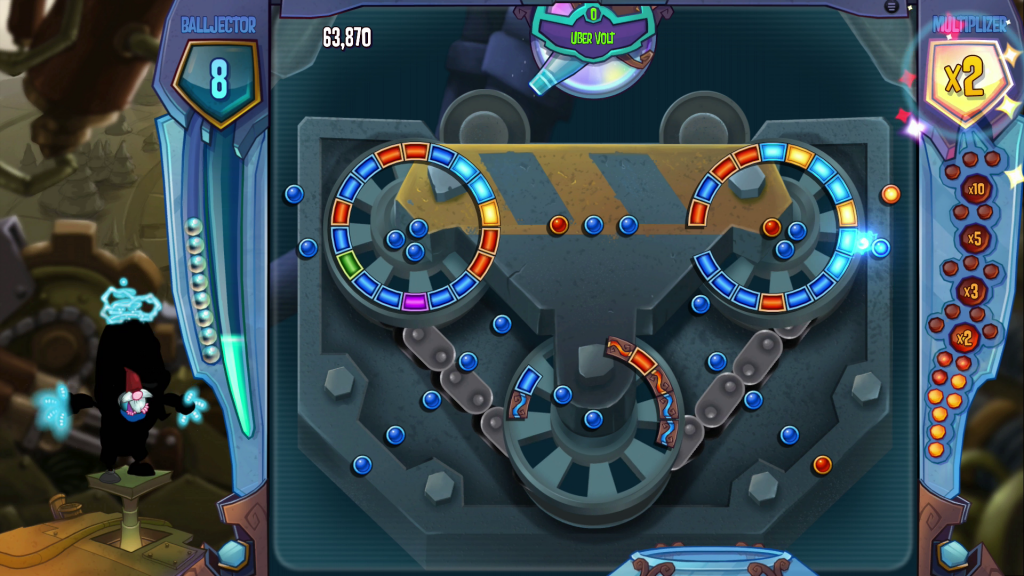 The difficulty is where the game starts to fall off at times. If you are a completionist, as I am, then this game may make you want to rip your hair out. Beating all the trials are a major challenge. But it’s the optional goals on the regular levels that are truly ridiculous. Some of the goals are nearly impossible, one of which I literally stayed up for six hours all night until I beat. The reason why they are so hard is because Peggle 2 is such a crazy game. What I mean by this is that you can perfectly aim a shot at long distance and it can ricochet into the bucket just like you hoped. But the very next shot, if you just ever so slightly misfire it could go nowhere near your intended target and ruin pivotal chances. In every level there is a clear all pegs objective and ace score objective (reach a certain score). These objectives sometimes feel impossible given the layout of the level. Also another big complaint is that as much character and allure that each master has, the super shots for most are sort of pointless. Luna, Jeffrey, and Berg all have abilities that work fine on the few levels that are designed around it, but other than that they are useless. Bjorn’s super guide is useful for levels that require precise aiming. But all in all if you want to clear all pegs or get the high score, Gnorman’s Uber Volt is uber over powered. It zaps three surrounding pegs and is much more effective than the other super shots.

Peggle 2 is a blast to play. It’s fun, simple, and addictive. It’s very satisfying to get the hang of it and nail a tough shot. And it’s hilarious to see a bad shot luckily bounce around and take out half the pegs on screen. More balanced super shots for the masters would have been very nice. And lowering the difficulty to a less controller-throwing-across-the-room level would have been even nicer. Overall Peggle 2 is a fine sequel to an already very fun game. Keep ‘em coming Popcap!

PROS:
1) Bursting with charm and smiles
2) Fun simple gameplay, easy to pick up and play and satisfying to master