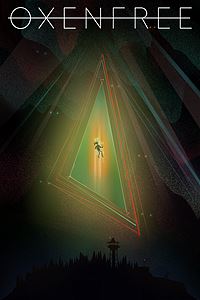 Of all the genres that have been reborn thanks to the rise of Indies, adventure (and specifically the walking simulator) games perhaps have it better than any. Specifically, story-based adventure games have been resurrected, and I’m personally thrilled about that. There’s something special about being sucked into the world of a game with great storytelling and atmospheric design. Gameplay usually takes a back seat, but that’s okay, it’s nice to play a game where I can sit back a little bit and focus more on the narrative. However, the gameplay still needs to hold up. Pacing is still important. Maneuvering throughout the world and exploring needs to be fun. There’s a delicate balance between a game working as an adventure game and wondering if it should have just been a book. Oxenfree walks this line dangerously at some points. However, the mysterious story and solid writing carries the game, and it’s an experience I won’t soon forget.

Oxenfree follows a group of teens on a rebellious night gone terribly wrong. The story is ambiguous, clever, and intriguing. I won’t get into any details because, in a game like this, any small element can be a bit spoilery. Every line spoken by the characters, every plot twist should be experienced personally be each player. So I won’t mention a single specific story element. What I will say is that the scary cryptic story is written well when compared to most video games.

And that’s the point here. I’m a pretty big critic when it comes to video game writing. There are a few games out there, like the Uncharted series for example, with phenomenal writing no matter what it is compared to. But for the most part, I’m afraid my beloved video game industry is kind of behind. I believe that most of the games that have reputations of fantastic writing really only have average writing compared to books, tv, and movies. And a video game with average writing when compared to its counterparts has below average writing compared to the other entertainment mediums. There are exceptions of course. I loved what CD Project RED did with The Witcher 3. Firewatch had a phenomenal script between Henry and Delilah. I’m only harsh on video game writing because I’m passionate about the industry and I want it to improve and grow.

The scripting, writing, and voice-acting in Oxenfree aren’t perfect, but it’s a step in the right direction. There are moments where the characters lines are pretty cringe-worthy, but other instances where the fantastic storytelling swept me away. That sort of sums up the game in general. Some moments wowed me and others bored me. The pacing is off. The game often ramped up to what seemed like an enormous moment, only to slow down seconds later as my adrenaline was still pumping. I won’t spoil anything here, but there are multiple heart-pounding, spine-tingling moments.

All the characters have their own personality and feel. Alex is rebellious. Clarissa is a jerk. Ren is a bit kooky. Etc. Everyone feels very real and relatable. And there is an intertwining backstory for the gang that I learned about as the game progressed. The most positive attributes of the game are in the character development and storytelling.
The island that the game takes place on is a character itself. It is fascinating, dark, shadowy. It’s just not fun to walk around in. I couldn’t help thinking that I wished this game was a short animated feature or that the walking around was replaced with cutscenes. Many “walking simulators” or adventure games struggle to find gameplay that is genuinely fun. Sadly, Oxenfree is one of those titles. There is an overwhelming sense of uncertainty that carries the game’s gameplay and story. Probably for a bit too long, however, at about 5 hours I would have preferred the game ended an hour before it actually did.

As soon as I finished the game I jumped online to see the various multiple endings. Based on how I interacted with the characters and the decisions I made, some pretty big changes can occur. This aspect of storytelling is something that only games can do, and I loved how Oxenfree handled it.
The sound design and music in Oxenfree are top notch, helping to push the game forward with a truly eerie atmosphere. Visually it has a unique art style that I don’t personally love, but I can see the appeal.

Oxenfree’s characters and storytelling are wonderful. I was genuinely on the edge of my seat at moments throughout the game. However, there is an inconsistency with the writing that is a bit disappointing, with some eye-rolling one-liners and a heavy reliance on “cliché” character types. That being said, when Oxenfree is at its best, it has an 80’s Spielberg feel to it that I really dig.