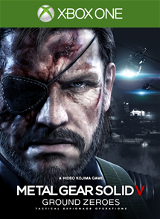 Metal Gear Solid V: Ground Zeroes is Kojima’s newest game in the extremely popular Metal Gear Solid series. It’s the first game to showcase the new FOX Engine. The game had a controversial announcement and release due to the fact that it’s a very small game that can be completed in literally ten minutes, although on the first play-through it should take about two hours. But the game does have great replay value and harkens back to a classic style of gaming that invites creativity in Snake’s sneaky attack. Of course Ground Zeroes is a stealth espionage game, but also Kojima adds new gameplay elements to bring in new gamers and a more forgiving nature. Does this ruin the gameplay? Is there enough game here for $30?

Ground Zeroes’ story takes place after Peace Walker, the PSP game which is one of the most beloved and highest rated games of the franchise. The campaign’s story will connect the dots of Peace Walker and the yet to be released The Phantom Pain, which will take place before 2008’s MGS4: Guns of the Patriots. The story is dark, jarring, and leaves multiple cliffhangers for what we will look forward to in The Phantom Pain. Kojima is known for crazy stories, over the top characters, and a lot of confusion. If you are a fan of the brain aneurysm inducing intertwining stories of Metal Gear Solid than you won’t be disappointed by Ground Zeroes. But if you don’t know what you’re jumping into, prepare to be disturbed and confused on whole new levels.

The gameplay in Ground Zeroes is extremely polished, deep, and thoroughly enjoyable. Kojima took a risk with some elements and they paid off. The main new idea to Ground Zeroes is that it is an “Open World” style game. Now this is using the term loosely because the game takes place in one refugee camp and not some big city or massive island. But the open world allows the player to navigate and pick and choose how to take on the challenge. This is extremely satisfying and replaying the game once the enemies’ locations and patterns are fully learned can be very fun. This is the classic style of gaming that Kojima wanted to add and he did it perfectly. Remember classic games like on the old NES that we would play hundreds of times? In these games we would learn exactly where enemies are, when to shoot, where to move to, when to jump, etc. And the joy of those games was beating it over and over and getting better every time. Kojima designed Ground Zeroes to feel like this and it’s great. There are also multiple side missions that take place in the same refugee camp but have new enemies in different locations and new objectives. Almost all of these are very unique and give so much imagination in how to approach them. One of which can be beaten completely by simply riding in the back of a patrol car, getting out and stealing the intel, and jumping back in unseen. At the end of each mission the player receives a rank, which also unlocks new weapons to use at the start of those missions to make it easier to get to that next ranking. At the end of the mission it also shows stats on how quickly you beat it, how many enemies were killed, etc. So speed runs, perfect runs, and more allow for some fun replayability.

Another new gameplay element is called Reflex Mode. If an enemy spots Snake as he is sneaking around, time freezes and the player has a few seconds to take down the enemy before the alarm is raised. It doesn’t at all break the feel of MGS, and in the open world environment where sometimes it’s hard to see if a patrolling enemy snuck up you, it’s a very smart design decision. Also in older MGS games there was an alarm system in the top corner of the HUD that showed when Snake was in the alert stage, evasion stage, or caution stage. This time it’s much more intuitive. There’s no on screen indication at all, instead the player must pay attention to the AI and their movements, the radio’s of the patrolmen and what they are saying. It’s another great decision that immerses the player in the stealth espionage action.

Ground Zeroes does definitely have some faults as well. It’s extremely short, and although it has some replay value, many gamers could be turned off by the idea that the core game is over in just two hours. It’s important to know that in the beginning of every Metal Gear Solid game, there is a few hour level that initiates the player with the gameplay and story of the game. In MGS2 this is the submarine level. In MGS3 it’s when Snake is initially thrown into the wilderness with a simple mission before later having to go back and then the game vastly opens up. I believe that Ground Zeroes was supposed to be the “tutorial” type level for Phantom Pain. But Konami needed some revenue and a big title for the first time in a while, so they decided to experiment by giving us Ground Zeroes. So they gave us that level along with a bunch of side mission and extras.

Fox Engine is gorgeous. The level of detail in the characters and the environment is some of the prettiest in gaming. One minor gripe has to do with looking at an AI character at distance. The faces are very blurred and non-detailed when looking through the binoculars at a distance, then they sort of pop into focus once it is zoomed closer. This is an ugly transition that is the only part of the engine that looks out of place.

Metal Gear Solid V: Ground Zeroes is a very polished, very fun stealth game. The open world style allows for impressive amounts of creativity. Each gameplay tweak is done wonderfully. It’s easy to fundamentally change a game, like the way Kojima made this “open world”, but fail to advance gameplay mechanics at the same time. Kojima didn’t miss a beat here. The graphics are stunning, especially at night and in the rain. The biggest complaints are definitely the length of the game, and this is a big deal. I ended up playing it for over 20 hours, but that’s because the gameplay and replayability hit home for me, but I can easily see this not being the case for everyone. All the side-missions are cool, and the creative replayable nature of the game is great. But it should have been an add-on to an 8-10 hour game instead of almost being the core game itself. If you like MGS you’ll love the story and Kojima’s craziness, but again if it’s not your thing it may just turn you off. Ground Zeroes is one of the more polarizing games of recent memory. I can see some people very much enjoying it while others could end up disappointed. I lean towards the former, but I do recognize that there could have been much more. If it’s just a taste of what Phantom Pain will have to offer than color me excited for this “next-gen” step into the crazy world that is Metal Gear Solid.

CONS:
1) Replay value is there, but main game is way to short
2) Overpriced for such a short main mission
3) Crazy Kojima and his madness