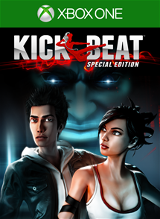 KickBeat is ZEN Studios’ take on a music and rhythm game played with a controller that has a combat twist. Unlike other music and rhythm games where you have arrows or different colored dots flying at you, KickBeat replaces those mundane items with circling enemies. Enemies that want to cause you great pain.

The objective of the game is to counter the enemies attacks, in rhythm to the music, using the A, B, X, and Y buttons as they attack you. When countering enemies you are rewarded with ‘chi’, which will fill your chi meter below your feet. Collecting enough will allow you to activate your special power which will double your score for your counters, just like star power in the Guitar Hero games. If you fail to counter an enemy you get hit and lose some health. If your health fully depletes, you fail the track and have to start over. Each track is graded out of 5 stars dependent on your score with elusive red stars to be earned in the higher difficulties for near perfect runs.

As for the power-ups, there are four different types, a health boost, a chi boost, a shield and a shockwave. The health boost replenishes some of your health, and the chi boost does the same for your special. The shield will protect you from incoming attacks for a short period of time and the shockwave destroys all enemies that are circling you getting ready to attack. I only ever used them if I got hit and struggled to find the rhythm again. If you pick up a shield of shockwave power-up whilst already holding one, the one you are holding will be removed and the new one will take its place but it isn’t much of an issue because they pretty much give you the same amount of time to recover your rhythm. The story is split into two parts. Part one, you play as Lee and part two you play as Mei, Master Fu’s Granddaughter. The last track of each venue is a boss battle, but it is essentially the same game play, just with different things attacking you.

After each venue which consists of up to four tracks to fight through, you are presented with some beautifully hand-drawn cut scenes. The voice acting throughout the cut scenes are pretty good all in all and I found myself laughing at a couple of the jokes too (my favorite being the Justin Beiber dig in the cut scene below).

With the game having 24 tracks, running anywhere between two and a half minutes and six minutes, you are looking at Lee’s story taking you roughly two hours. Mei’s story will take exactly the same amount of time, and this is where I was disappointed.

This leads me to the greatest part of the game in my opinion. The track list. I was absolutely blown away by the tracks. Each track just got better and better and I found myself looking forward to the next track just as much as playing the game itself. These are the tracks included in the game:

Other than story mode, KickBeat offers a survival mode, a freeplay mode and a split screen mode. In survival mode, you play through track after track until you lose all of your health. I can’t actually say whether or not your health regenerates after finishing a song because no matter how hard I tried, I was unable to finish the first song and there is no way to alter the difficulty of survival mode.

In freeplay mode, you can make a playlist of any songs you want and just play through them. Nothing fancy, but pretty much every rhythm game has this mode.

The game has four different difficulty levels and if, like me, you aren’t a rhythm guru, I would strongly suggest starting out on Normal difficulty, which is the lowest difficulty. I even found the first two or three songs even on Normal difficulty to be too much. Surprisingly though, things got a lot easier as the story progressed. I think the rhythm was a lot more prominent and easier to follow in the later songs. On the higher difficulties, I really struggled, regardless of the song and I’ve only managed to finish one song on Master difficulty which is the highest difficulty level. The level of difficulty is extremely daunting, especially for newcomers to this genre, but when you do finish a track and you get rewarded with five stars, you get a massive sense of accomplishment, regardless of what difficulty level you are playing on.

With the game being so difficult, you need to make sure you can play it with no distractions. If you cannot hear the music it is near impossible to stay alive, let alone finish with a half decent score. This leads me to my biggest gripe with this game. If you pause it mid track there is no countdown when you unpause it. You might as well restart the track if you have to pause the game because it is pretty much impossible to carry on without a countdown.

Onto the achievements. What can I say? there are at least 14 achievements that will be difficult to near impossible to obtain. The game is no joke. You need to five star all songs on Master difficulty. If you can do that, you have a fighting chance, but it gets even harder. They expect you to only get perfect hits on a Master difficulty song and complete 18 songs in survival mode. Scary stuff for completionists.

All in all, KickBeat is a great Rhythm game with a unique twist. The track list is probably one of the best track lists for a game I have played and although the learning curve is steep and the story is a bit short and repetitive, it is a great buy for $9.99. If you are a completionist, I would stay well away from this one unless you have crazy rhythm skills. I have already resigned this one to forever be incomplete on my tag.

CONS:
1) No countdown when unpausing the game
2) Short and repetitive story