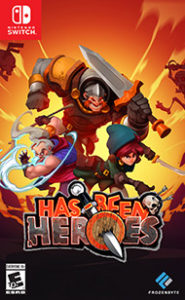 Has-Been Heroes is a rougelike action strategy game developed by Frozenbyte and published by GameTrust. It’s available digitally for the Nintendo Switch, Xbox One and PlayStation 4. A physical release is available exclusively at GameStop. The premise is very simple in nature, there are some old heroes that have been summoned by the king for one last mission. While starting that mission the villain of the game starts his apocalyptic plan and it’s up to the old heroes to save the day. And right along the line of a true rougelike, there is only one live and one try for the player to save the day. One party member dies and the game is over. The gameplay itself is unique and creative, Frozenbyte has something cool on its hands here. However the game feels unpolished and ridiculously difficult. There’s a grind and many deaths that the player needs to go to before they can even understand and move forward in the game and I’m afraid that after an hour or two most players will give up before they can get to the aspects that are somewhat redeeming. 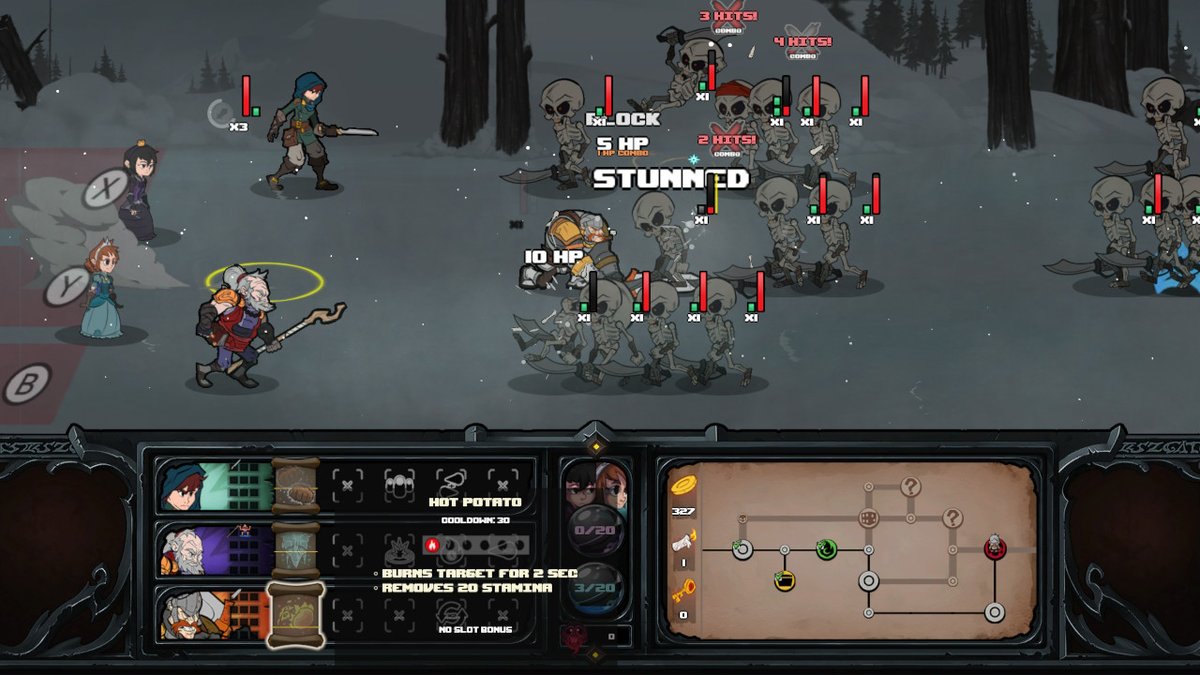 Gameplay is king in any video game, at its core a game needs to be fun. Has-Been Heroes gameplay is very cool but incredibly difficult to grasp early on, and the simple tutorial section doesn’t do a good job of explaining itself. Basically there are three heroes running through the levels at max speed and as the battles start the game goes into “slow-mo”. While in battle enemies are running towards our heroes and each character is controlled with a different button on the controller to attack and rotate. Enemies can block and have stamina, it will almost never work for one hero to wail on an enemy to take it down, the enemies need to be weakened by one hero and finished off by another. Once the stamina is depleted after a couple of hits, it becomes vulnerable for another hero to swoop in and do damage. It’s a fun and novel idea, but it certainly takes some getting used to. 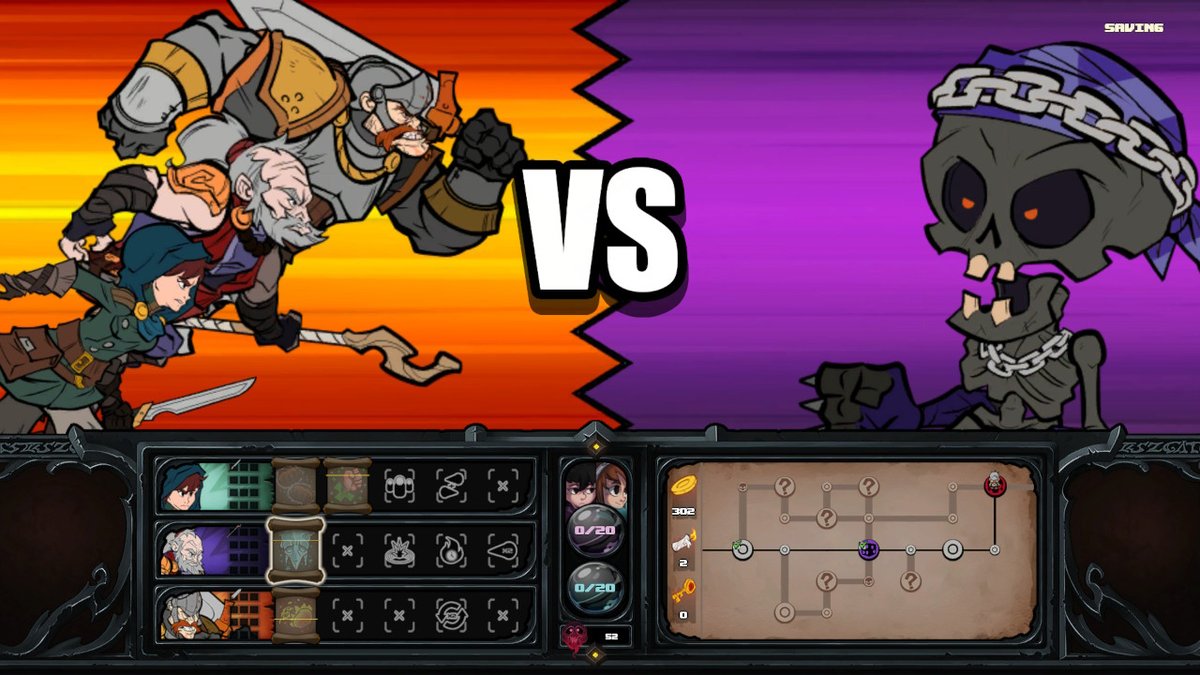 The game’s difficulty is of the charts, and for the first 3-5 hours it seems like it is completely unfair for multiple reasons. One reason is that the learning curve is really taxing, it honestly takes a few hours to get a grasp of how to successfully take on dozens of enemies on screen. The second reason why the game seems unfair at first is because there are a ridiculous amount of unlockable items and spells and these can only be unlocked by playing the game and getting them over time. So you are better suited to fight the wave of bad guys after you’ve played the game for 5 hours and have better goodies to fight with. Speaking of spells and items the way you collect them is a bit strange. Basically there is an over world to travel through and each area might have a battle or it might have a treasure chest or a merchant selling things. The treasure chests and merchants are the ways to get items and collectables, but if you are unlucky in what they are selling or what is available to you than you might be screwed when it comes time to battle. Those spells and items are key, without them there is no way to beat the boss levels. So that’s where the repetitive and difficult gameplay comes in. It’s basically a crap shoot for the first few hours before you unlock the ability to possibly collect good items and spells—and even if you do unlock them you might not get lucky enough to collect them during a play-through so again you’re kidna screwed. I had quite a few play-throughs where I had no chance because I just wasn’t lucky enough to collect the right spells and items and that luck factor just doesn’t seem fair. And to make matters worse the over world map has different paths and choices you can go to, so you might think hey I should just go on every possible path to find every item and spell before I face the boss! However there is a silly and unexplainable design choice where if you backtrack to an area you’ve already gone to that area will be covered in darkness. The only way to survive this darkness is to have a candle, and I’ve yet to fully understand how to get more candles. Basically you are forced to not be able to explore the whole map because you will die in the dark. Why will you die in the dark? Who knows there is zero explanation. So if you’re hoping that you can backtrack on different paths to find more items and spells you are out of luck because the dangerous and ridiculous darkness will kill you… And I thought we were taught to teach our children to not be afraid of the dark…. I digress… 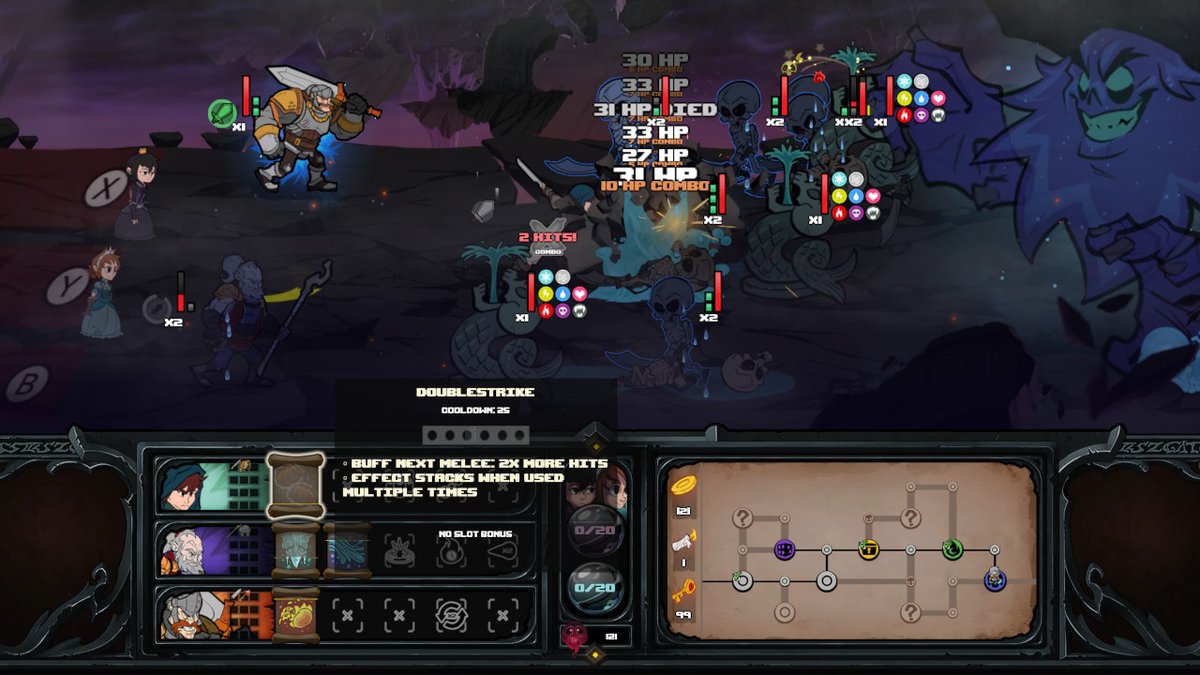 If you somehow manage to beat the boss of the first world you will be treated to a second world that feels identical in nature with pretty much the exact same bad guys. The final boss who is some kind of pirate king from the underground world is ridiculously hard, and again I felt like the only reason I beat him was because on my run I was lucky enough to get a few really helpful spells. Once you kill the pirate zombie king guy you beat the game! Sorta… Basically by killing the pirate king dude (I really don’t know his name) you unlock a new character to play with, you basically bring him back from the dead. And now you can set off on your adventure again! This is the nature of rougelikes, you have one life and when you beat the game you unlock stuff to help you go beat it again. If the game’s gameplay loop is superb than this can be truly fun. Along with setting one of the old heroes free and being able to play with him/her, you also unlock a bunch of new spells and items that are attainable on your play-through. You also unlock new enemies to fight. This is bitter sweet because the enemy diversity is absolutely awful at first so having new guys to fight spices the game up a bit, but it also makes the game much harder because these new enemies are that much toughter. Again this is all normal in the rougelike gameplay loop. Also once you beat the game for the first time the next time you have to beat three worlds instead of two. And the next time you have to beat four worlds instead, I suppose it continues but I couldn’t beat the next boss, I’m working on it. 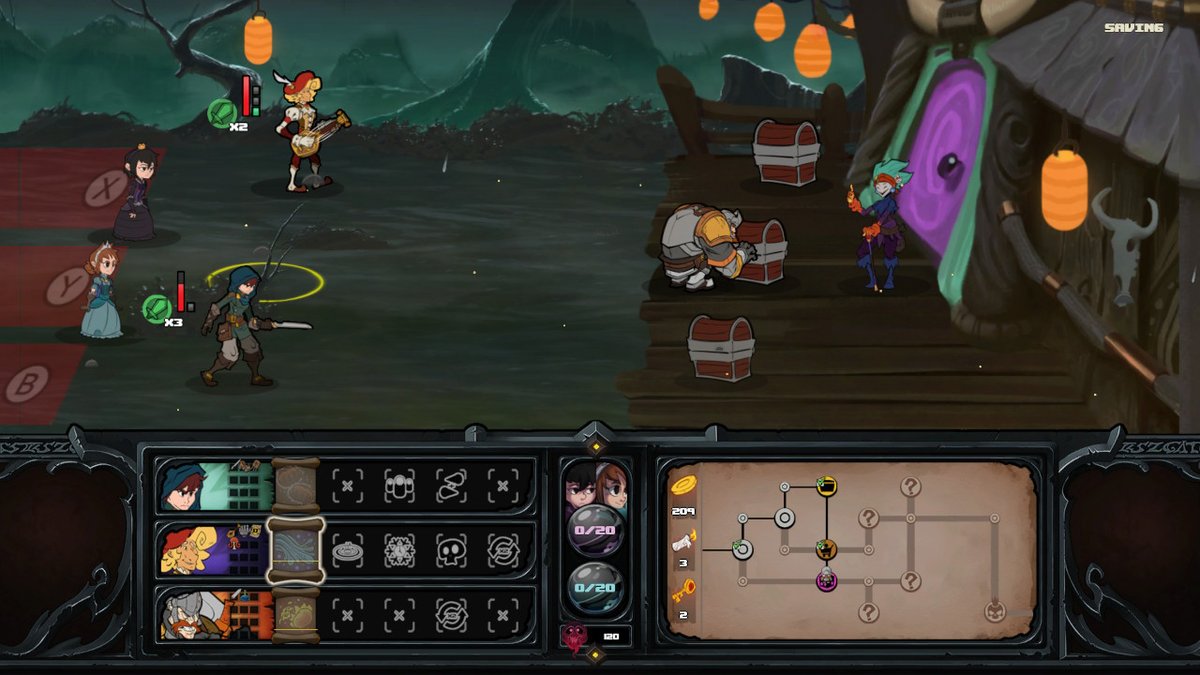 The animation, art design, character design, enemy design, and overall graphics are horrid. They are just really bad. It reminds me of early Xbox Live Arcade games from a decade ago. The characters are also genuinely uninteresting to me, they are supposed to be diverse and lively but instead they just feel like they came out of a strange and boring cartoon from the early 90’s that didn’t catch on. The cut scenes, if that’s what we want to call them, are boring at best and unprofessional. The story is also just goofy and bland. That might not matter a whole lot but it would have helped the game for sure to be a bit more cinematic. The music really confuses me. The first few worlds have unequivocally terrible music, ear-wrenching and repetitive. But then the third world has good music, really catchy and eerie and fun. By no means is it going to win any awards but it sounds nice. It’s confusing to me that a game that is so difficult and repetitive would have awful music early on, just another reason for a player to give up on the game early. All of the visual, musical, and story-telling flaws are especially disappointing to me when I take into account the developers. Frozenbyte made a game called Trine, along with its sequel Trine 2. The Trine games have a nice little story, really pretty graphics, and a great eerie soundtrack and tone. Trine is a puzzle platformer and a hidden classic in my eyes, and part of the reason is the overall presentation with its great art style, tone, and music. It’s sad that Has-Been Heroes gets a big fat “F” grade in comparison to Trine. I’m not sure why Frozenbyte dropped the ball this badly when their previous series did it so well. 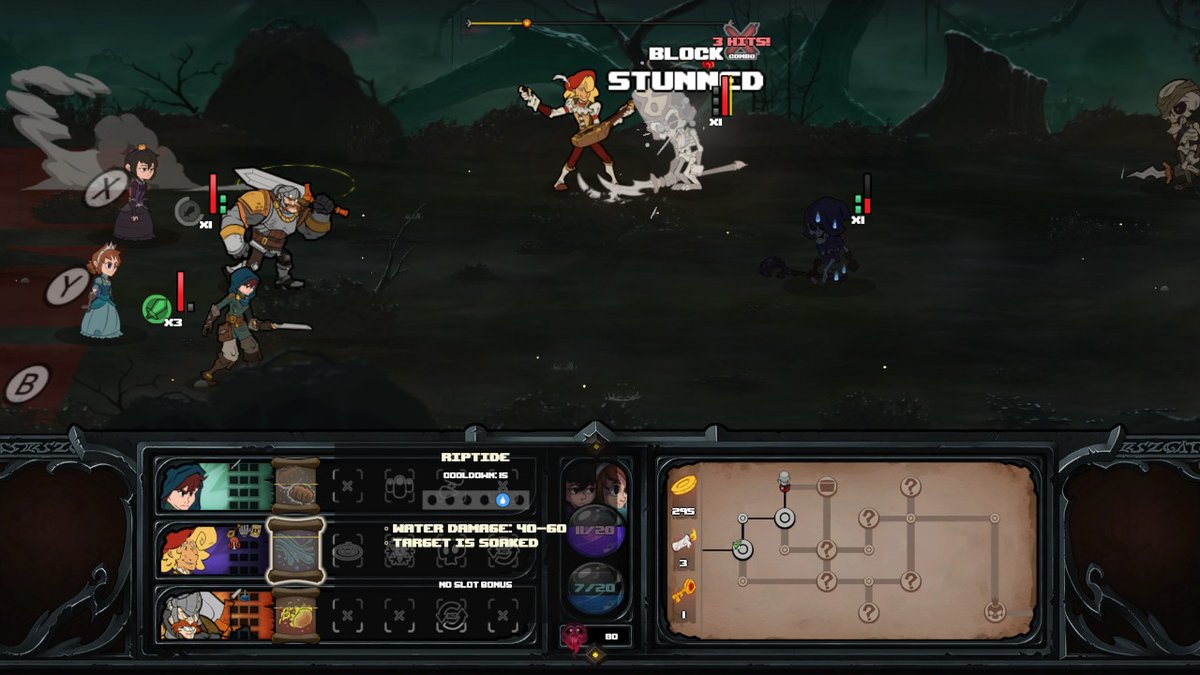 Has-Been Heroes is a disappointing game. I played it on the Switch, although it’s being released on all major consoles, I felt like it could be a great fit and a fun little game for the Switch with its home-console/portable crossover attributes. However the game falls short in a multitude of ways and just doesn’t live up to what Frozenbyte has created in the past. It’s really unfair, difficult, and is based far too much on luck. The art style and music certainly don’t add anything to the experience, on the contrary they hurt the game. If you can fight through the repetitive and difficult first five hours or so of the game you might find yourself really enjoying the gameplay loop. I started to enjoy the difficulty and fun unique gameplay after I drug myself through the early monotonousness. But to be honest, if I wasn’t reviewing the game I might have given up before I found some of the hidden fun baked into Has-Been Heroes. I do give Frozenbyte some credit for the gameplay that really feels fresh and different. If you like rougelikes and you like to try new things than maybe fighting through the steep learning curve and generally unpolished nature of the game will be worth it for you. But to be honest I might wait until the game goes on sale—especially if you’re like me and anything that pulls you away from Zelda feels like an unpardonable sin.

CONS:
1) Lackluster art-style and music
2) Based too much on luck and unfairly difficult
3) Not easy to learn and doesn’t feel like you can master