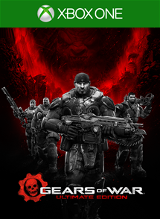 So Gears of War Ultimate is a interesting game for a lot of reasons. First off we have a Microsoft published franchise that is coming out with a remaster during the same period they are touting their amazing new backwards compatibility feature. The second issue is this is just Gears of War 1 for $40. So many of these remasters are including an entire series for a better per game price point. The biggest being Halo: Master Chief Collection with the entire base Halo series, and the Halo franchise is also from Microsoft.

First off, if you haven’t already played Gears of War 1 when it launched on the 360, presumable becuase you were just a gleam in your daddy’s eye, then just buy Ultimate right now and get yourself into the franchise. If this is your first time with GoW then my rating to you is a 9/10. The original is still one of my all time favorate games and Ultimate is undoubtedly a better version of it. One of the few games that is equally good at co-op as it is at multiplayer. So just go get it now.

If you have played it on 360, well then let’s look at what’s changed in the campaign. They’ve thrown in a few more missions at the end that used to PC exclusive. The graphics are a marked visual improvement. Moving, running, aiming and cover detection are improved also. There is a new casual difficulty that is even easier for people to jump in and get killing and with that there are more checkpoints so even after dying you have less rework time.

But on the other side of things there are plenty of graphical glitches. I spent the better part of one mission with half a door sticking through my character and you’ll still see from time to time crazy death scenes with characters spasming like they have the charlie horse from hell. The second issue is that your AI Team are just a bunch of complete and total fucktards. There is no nice way to put it. At the start of every mission you should point them to the short bus and get them the hell away from any action. There are times you will just stand in a little clump like they are playing Magic completely oblivious to the battle you are single handly fight around them. There are time when they seem to forget that that creature across from them is the Lotus and instead believe them to be Girl Scout Girls and walk right up with $20 in their hands to get some cookies and of course instead take a shotgun to the mouth. Unfortunately at this point you are supposed to walk up there and heal them because you god damn know that none of the other AI is going to do it.

I still have horrible nightmares about the 2 hours it took to find a match when Gears of War first launched way back on the 360 but so far for me these issues are gone. Multiplayer plays a lot smoother and Gears is a unique multiplayer experience in so many ways. From the cover system to gnasher gameplay to grenade tagging. But a smoother experience is not a NEW experience and it’s still the Gears I played so many years ago.

If you’ve already played Gears of War you have to ask yourself if you are really ready to grind another 10,000 kills in mulitplayer? (Hopefully they actually track correctly this time). Do you even want to? It’s a great series and I’ll definately play any Gears that comes out in the future but for me, as a guy who played the crap out of it on the 360, there just isn’t enough new here to get me excited.

PROS:
1) Great entry to series if you haven’t played before
2) Runs faster and smoother

CONS:
1) Dollar value, this game will be BC soon
2) AI Teammates are the absolute WORST
3) Not enough new