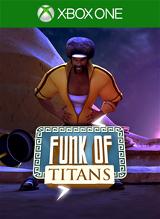 Funk of Titans tells the story of Perseus, son of Zeus, and his quest to retake the heavens in the name of Funk music. Yes, Perseus’ epic quest is to take back the heavens from the likes of Pop, Rap and Rock so that the god’s funkiness can rise again. I don’t know if this is pre- or post- Medusa as the game is pretty light on “story” but I can assure you that Perseus is up for the task. Funk of Titans is a platformer with the gameplay mechanic where your character is always being pushed forward. There is some directional play but for the most part your job is to either Jump or Swing your weapon. Everyone seems to be going hardcore with platformers today; 1001 Spikes, Volgarr, it’s nice to have a game that makes it’s mark with fun rather than frustrating memorization and twitch responses. Funk of Titans is fairly forgiving with a kind of “I know you really meant to jump 1 second later, so you made it!” feel. The question is did they dumb it down too much? 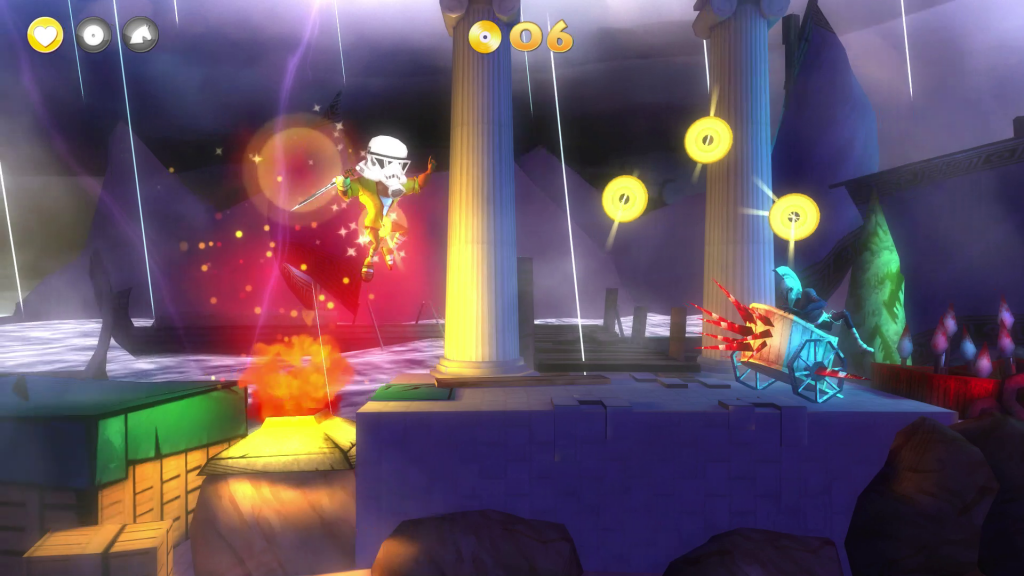 Each level has 3 gold awards you can earn. One for taking no damage, one for getting all 100 vinyls in the level and one for getting the Pegasus Idol. Once you succeed at one it’s permanently completed so you can do these one at a time, but once you get a feel for the game getting all 3 at once will be the norm. The game does introduce a few new wrinkles in each world with updated puzzles and mechanics. The 100 vinyls is a perfect run and although a few will be found in large jars (in fact every jar has a vinyl so always destroy every single one of them) the most important thing is to always look for the vinyls to show you where to head next. If you come to a choice and one path has a lovely bouquet of roses and the other is a shear cliff covered in poison tipped spikes but the cliff has a vinyl; then just jump, that’s the correct way to go.

When you get a Pegasus Idol in a level, and complete the level, you are taken to a bonus stage for a chance to get some extra vinyls. This bonus level is the closest you will probably ever come to playing Flappy Bird on the ONE. There is only one level that you will play again and again and again but at least the order you take on obstacles is randomly generated. You are pretty much playing Flappy Bird in this bizarre combination of Ipod Nanos and food items. I am to this day baffled by the level design. I get iPods are music but am I missing some Funk connection with cupcakes and french fries? For me this was a huge letdown. This section is about the only part of the game that takes any real skill and the biggest reward is more vinyls, which you will be swimming in in no time. There is no option to skip these Pegasus levels so by world 2 I was just letting Perseus plummet to his death as fast as I could to get on with the actual game.

There are three worlds; Pop, Rap and Rock. Each of these have two boss battles. These are some of the easiest QTE (Quick Time Events) you have ever played. It’s actually one of the biggest disappointments in the game. The first in each world is a mid-boss grunt. You have three rounds of simply pressing the four buttons as they come up. Easy. The final boss of each level, a Titan, is the same exact QTE only the boss goes first and you have to beat their score. You would have to go out of your way to lose any of these battles. The Grunt battles are 100% exactly the same in each world. Same animations, everything. In fact the entire game has only 3 enemies. A guy with a pointy hat (kill), a guy with a round hat (jump on his head most of the time) and the round hat guy behind a spiked chariot (always jump). For 40+ levels. The design of the levels themselves is superb with some of the pathing and timing being a thing of beauty. 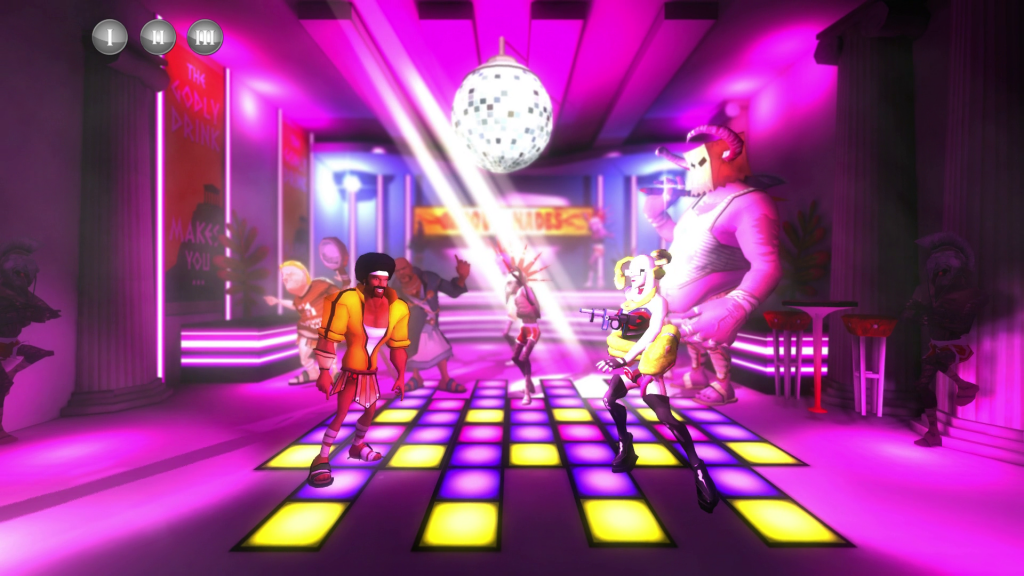 These battles highlight one of the downfalls of the game which is the sound. They developed a game around a battle between Funk and other music genres and the background music is just generic. At the very least I was expecting a little funk vs pop/rap/rock music for the boss battles. There is always the argument that you get what you pay for on indie titles but when you base your story on music, it’s nice to have the music at least match the levels.

All those vinyls you are collecting are the game’s currency. There is a large store with different weapons and helmets covering all kinds of pop culture references from Star Wars to Friday the 13th. A nice touch is these items are used in the in-game challenges and also are required to open up magic doors protecting some of the more rare Pegasus Idols.

Funk of Titan plays very smooth and the mechanics behind the game are very solid. The problem is you are going to get distracted from this by pointless and subpar boss battles and a flappy bird clone that seemed misplaced and tacked on. I would of preferred they either had dropped the Pegasus angle all together or make the rewards for playing that level more appealing.

CONS:
1) Sound could be A LOT better
2) Simplistic and Repetitive Boss Battles