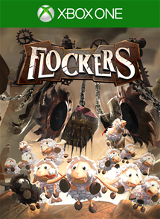 Flockers is a Lemmings style puzzler where you herd sheep through a series of obstacles and try to get as many as you can to safety while avoiding death spikes and buzzsaws and a just a ton of other sheep life ending devices. The sheep’s part in all of this is to just go forward, period. They don’t think about how 20 sheep before them were just horribly sawed in half. Until you tell them differently, forward they will go. Like hardcore White Wilderness style. So yes, the first thing you are going to say to yourself is, “Self, this is Lemmings. But with Sheep.” and you’d be telling yourself the truth. Not that there is anything wrong with that. Lemming was a fantastic game, in 1991, when it came out. The question is does Flockers do it better or worse and does this style of game stand the test of 2 decades time?

The basic ability in Flockers is a system of blocks to aid you in moving about the stages. A single sheep block might help you climb a small ridge or allow you to aid other sheep in dropping from a high distance. From there you can add another sheep to the top to create a wall to block the sheep’s movement while you wait for a buzzsaw to move past. You can also stagger the sheep to create a series of stairs to climb to even higher area. The genius of this system is that these constructs also allow you to break them down in interesting way. Take the 2 sheep wall, add a bomb to the lower sheep and you just created a cannon to send the top sheep to press a button or reach a new area. During the first couple of levels I was worried that this lack of abilities would be this games downfall but these secondary interactions had a new level of planning to the game.

The other abilities are just as basic and straightforward. You have jumping, flying and making a bomb. Standard abilities to be sure but there are nuances here. Take the jump. It’s a pretty big jump and there are times when activating this ability too early will actually hinder you as sheep will jump over things you need them to hit, like buttons or waking up other sheep.

The graphics are what I can only call standard Team 17 graphics. Nice enough but definitely more 360 than ONE. Flockers looks almost exactly the same as Team 17’s last game Worms Battleground with the slightest of upgrades. Flockers provides an in-game challenge system where you can earn different skins and blood color. Yes, the color of blood your sheep’s bleed when they die horribly is customizable. These skins are modeled at a fairly high level of detail and you can see this higher quality when viewing the sheep close up, but that level of detail is lost when you zoom out enough to be able to see your entire flock at once so you can micro manage and keep them from dying every half a second.

One of the biggest opportunities missed here is when you get stuck with no way to finish the level. Lemmings had a bomb button that just tore the entire world apart and made it a little bit ok that you just lost horribly. In Flockers you just get to hit Restart. Kind of a minor, but in my heart a major, letdown.

There are 60 main level with every 10th being a “boss” level. Pretty much boss level means that there is something that is going to be actively trying to eliminate your sheep besides your own errors. There are also 6 secret levels unlocked by running over a special icon that is hidden in a standard mission. These secret levels offer up some pretty unique design. The first one being a group of sleeping sheep and you are scored by the number you can wake up in the time limit and then also keep alive. These variations here and there help to keep you going from one puzzle to the next without boredom setting in.

One of my issues is a complete lack of story. Now this is a puzzler so it’s not going to be War and Peace, but I’ve come to expect a funny little side story to my puzzler of late and there is pretty much nothing here. A 10 sec intro that doesn’t explain anything and doesn’t push anything forward in any way shape or form. It’s like they started to write and animate something and just got bored with and felt they had “put all this time into it so I guess we’ll put it in” type of situation. Opportunity lost there.

Let’s talk about difficulty. To just finish a level, that’s going to be easy. I haven’t seen a level where you need to get more than 1 sheep to the exit to count as completing the level, BUT if you are going for 3-star perfection, which there are several achievements tied to, it is brutal. You need to be perfect on a lot of levels. No mistakes, no misplaced sheep, no hesitation in placing your abilities. As I played in the review environment there were many early levels where I barely got 3 stars and no one else had. Obviously guides will be coming (I’ve filmed quite a few 3 stars myself) but on it’s own it can quite the challenge to get everything exactly right.

If you are an achievement hunter this game is going to be a bit of a challenge. The majority of the achievements (over 50%) are more end game style. 3 staring everything, killing a TON of sheep in various way. That sort of thing. One is for killing 500 zombie sheep, not too hard in a game about sheep getting murdered right? You unlock the Zombie sheep by kill 5,000 sheep, so its really an achievement for killing 5,500 sheep and when each level has around 30 or so sheep it is a bit of a grind.

Overall this is a fun puzzle game which the ONE is direly in need of and hits that nostalgia button at the same time. It’s tough difficulty is alleviated by the fact that even if you don’t 3 star something you can come back and work on it later without completely halting your progress in the game.

CONS:
1) Graphics are lacking
2) No story to help push you along