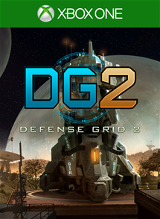 Defense Grid 2 is a tower defense style strategy game in the same vein as its predecessor, Defense Grid: The Awakening. The aim of the game is to stop aliens from invading your base and stealing your precious power cores by placing upgradeable towers on the map. If you lose all of them it is game over. The great thing about Defense Grid is how it differs from other tower defense games I have played. When an alien steals a power core it isn’t gone until said alien leaves the map with it. So you can scramble and kill the retreating aliens with added towers if need be whilst they try and escape the map. I found that I was killing the majority of aliens whilst escaping.

At the start of each mission you are given a set amount of resources to spend on buying towers. You get to choose from 9 different towers ranging from guns to missiles and lasers, along with a booster tower which increases the effectiveness of any tower you place on top of it. Each tower can be upgraded a maximum of two times. All of which will cost you more resources which will consistently replenish throughout the mission. You also get extra resources as a wave end bonus at the end of certain waves. As you progress through the missions, you can be randomly rewarded with tower augmentations which you can equip to your towers (one at a time) to increase their power or add abilities such as targeting the most powerful enemy first. Defense Grid 2 does a great job of incorporating the different towers as you progress through the missions so you are not bombarded with too many options from the word go.

Along with being able to place towers on the map, you also have a special ability to use which is determined by which Command Team you choose to take with you on the mission. After using all abilities in different situations, I never really used them again as there was no need for it. Maybe if I was competent enough to play through it on a harder difficulty level (yes, I am a strategy baby, so I played it on Easy…but I’m World number 1 on mission 11!) the special abilities would have played a larger part in my strategies. Yeah, proud of that. Leaderboards are a prominent feature and in each mission your score is racing against your friend with the closest score.

At the end of each mission, based on your performance you can receive a Bronze, Silver or Gold medal. I can’t give you the requirements for scoring well in the game as I have received Gold medals with only one power core remaining, all power cores remaining and using all resources or hardly spending any at all. So it is a bit confusing how consistently get high scores.

The missions in this game are not short by any means. With some missions having 100 waves of aliens, you will notice that they can take up quite a significant chunk of time. But with the RB button, you can speed the game up. If it wasn’t for this feature I can honestly say I would have been bored out of my mind within the first few missions. The default speed the aliens attack is mind numbingly slow. I would have preferred it if there was a slow down button with the sped up game play being the default. I only ever played on the default speed at the beginning of each mission to set my initial towers and if all my power cores had been stolen. The other quite nifty feature is the ability to revert to your last checkpoint by pressing LB. In too deep with wave 48 of 50 and wished you had a set of concussion towers next to the base? Tap that LB button and go back in time unpunished. I didn’t actually use this feature much, mostly due to the fact I was playing on Easy, but I can see how this feature can be indispensable for strategists playing on the higher difficulties.

Speaking of the difficulty level, as I mentioned above, I played through the campaign on Easy after dabbling with the Normal difficulty and having my rear handed to me on a plate several times over. I have no idea how anyone can complete the game on Hard, never mind the highest difficulty, Elite. With that being said, Easy was just too easy. Unless there was more than one core to defend, I could literally use exactly the same defense layout on each mission. It didn’t even seem to matter what towers I used either. I managed to get gold ratings on every mission I played whilst grinding out some of the achievements for placing 100 of each tower.

Including the prologue, there are 21 missions to go through in the single player portion of the game. Each mission begins with a wall of text for you to read which gives you the outline of the story, which is bland at best. Not really worth mentioning to be honest. Each Command Team you encounter has their own dialogue and whilst some of the dialogue can be quite amusing, they don’t really add anything to the story at all. Although 21 missions doesn’t sound like much, each mission has plenty of different challenge modes to choose from, really adding a huge amount of replayability to the game. Each challenge mode has certain rule changes for example, in ‘Out of Bullets’ you are tasked with defending your base without the use of Gun or Cannon towers. General Fletcher showing off some of his British wit.

Something I noticed that Hidden Path Entertainment should really be commended for is the inclusion of a community suggested game type. In the first 7 missions there is a challenge mode called ‘Fully Loaded’ which gives you all tower types to beat that mission and they have even credited the community member for the suggestion which I think is a really nice touch.

Although I found the story uneventful, the levels couldn’t be more opposite. Yes, the levels look unappealing to me and they look very similar, but each one plays very differently. Some levels have you defending one base with a myriad of options as to where to put your towers, as well as several paths for the aliens to attack your base. In those instances you have to block off the paths with towers to funnel the aliens towards the path you want them to take. Others have you defending two bases with several paths where aliens could attack from or a set path with limited options as to where to put down your defenses. On top of this variation, some later levels change their structure by adding sections of the map for the aliens to divert across.

If you find yourself overwhelmed in a certain area, you can buy extra sections of the map by using the command shuttle to sway the tide in your favor.

Speaking of the many game modes, Defense Grid 2 comes with three multiplayer modes. The first one is DG Fighter where you compete against another player and any aliens you defeat will appear on their side of the map and vice versa. The second is Co-op Doubles which has two players working together on a single map. Lastly there is DG Coordinated Defense which has you and another player attacking the same aliens on the same map but you each get allocated positions for your towers to be placed. I cannot really give much of an opinion on these modes because I was unable to find a match. Whilst searching for a match you can continue playing missions on single player if you wish, which is something more games should definitely incorporate.

Even though Defense Grid 2 has an immense amount of replayability, the high price tag that comes with it will probably make a lot of gamers that aren’t already a fan of Defense Grid to go get their fix elsewhere until it either appears on sale or as a free download as part of Games With Gold. Although I do feel the price point is a bit lofty, if you enjoy Tower Defense games you will not be left disappointed. That there, is the problem. Unless the price decreases, Defense Grid 2 is only really going to appeal to that niche audience in my opinion.

Onto my favorite part of every game…the achievements. Defense Grid 2 boasts a huge list of achievements, 65 to be exact. Ranging from placing 100 of each tower to defeating 50,000 aliens and the humdinger of them all, achieving 100 Gold Medals across any mission. You get 21 Gold Medals from the story mode, the rest are going to be obtained from completing all the different types of challenge modes for the missions. There are plenty to choose from but it is a bit of a grind. I’m sitting at just under 40 right now and took a break from it. But I am looking forward to picking it back up in a few days to get the remaining 60ish. All in all it is a good list with a variety of tasks you need to perform. Just a little note, any achievements that you should unlock during a mission will not unlock until after the mission is complete, so don’t panic!

Overall, Defense Grid 2 is a fantastic addition to the Tower Defense genre with spectacular level designs that will really get you thinking about where to put your defenses. Although the story is severely lacking, the sheer amount of different game modes available more than makes up for it. The only real sticking point is the price.