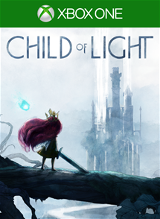 Books can tell incredible stories with brilliant writing that take the reader to other worlds. Movies can show the viewers those worlds in ways they couldn’t have imagined. Music can make the listener feel those worlds in unexplainable ways. Video games may be the only medium that can do all of these things in one. And with the ability to experience and move in those worlds, video games can also make you live those worlds like nothing else can. Child of Light is a living breathing fairy-tale book, with art and beauty that the makes the big screen jealous, and music and ambiance that would make the orchestrators of old truly proud.

Child of Light is an RPG developed by Ubisoft Montreal. It’s a 2D platforming adventure game that feels like a classic Japanese RPG. It’s also the first non Rayman game to use the incredible UbiArt Framework engine. Ubisoft has been on a roll lately. They’ve been able to continue franchises with success by reinventing them instead of just cashing in, like the Assassin’s Creed and Far Cry series. They’ve also continued to introduce new innovative games like Watch_Dogs and The Division. And as of late, they’ve started to release small scale “indie-like” games using the UbiArt Framework. The diversity and quality of these games is wonderful. Far Cry 3 was an extremely successful game that had both critical and sales success. You’d think that Ubisoft would see that success and want to do nothing but roll out Far Cry games. But that’s not really the case. Instead, Ubisoft allows the creative director of Far Cry 3, Patrick Plourde, to completely switch shifts and create a wildly different and gorgeous game, Child of Light.

In Child of Light, you play as Aurora, a daughter of a Douches and Duke in Austria in 1895. Her mother passed away when Aurora was just a baby. Raised by her father alone, Aurora herself falls ill and dies in her sleep. When she wakes, she arrives in a new unknown world called Lemuria. Aurora has to find out where she is, why she has come here, and how to get back home. Along the way, she meets many new friends and foes and people in-between. She learns that the Queen of Light who once ruled the land has disappeared and the Black Queen has taken over. The sun, the moon, and the stars have been stolen and the land is swallowed by darkness.  The real beauty of the story of the game is the writing. The entire game is written in rhyme. The plot and the communication between the characters are read like a poem. The rhyme is most in the style of A, B, C, B. But other styles are used as well. It’s beautiful and unlike any story I’ve experienced in a game before. Only a few times did the rhymes feel like a stretch; for the most part, it sounds just like a classic piece of poetry. Each character has so much personality and even the way they speak and rhyme feels unique to their own. There’s a firefly named Igniculus, who becomes Aurora’s best friend. There’s a coward dwarf named Finn and an in-love mouse named Robert. There’s a happy jester named Rubella and her depressed jester brother Tristis. Each of these and more are characters that join you in your party. There are also plenty of non-playable characters that play important roles in developing the story. It’s a storybook plot told in a powerful way. There are twists and turns that feel right in place in the fantastical world. Everything about the story of Child of Light feels like a perfect fit.

The gameplay in Child of Light is personality my favorite battle system in any RPG I’ve ever played. Before you enter into a battle, you traverse Lemuria as a 2D platformer. There are a few puzzle type elements but they are really just roadblocks that last a few seconds before you learn how to bypass them. Enemies are scattered throughout, if they see you and hit you, you enter battle mode with the enemy getting the first hit. And if you hit the enemy from behind first, you enter the battle with the advantage. Your first friend you find is Igniculus, he helps in battle in a completely different way than the other party members. You can highlight enemies with Igniculus and hold them to slow down their attack. The battle system draws comparisons to the Active Time Battle system from Grandia, an RPG that Ubisoft published at one point. It’s a mix of turn based fighting and engaging action. On the bottom of the screen, there is a meter that has each player from your party and the enemies. Each one moves down the bar until they reach the attack section, which is where you can select your move. Some moves are quick; some are more powerful but take longer. Some attacks can slow down the enemy, some poison them, etc, typical RPG stuff. But the reason the “typical” RPG stuff feels anything but typical in Child of Light is that speed, being frozen, and slowing down completely changes the battle. If you hit an enemy while they are in the “attack” section you can push them back further. I’ve had plenty of matches where the combination of slowing the enemies down and hitting them at the perfect timing resulted in them never even being able to get a single attack off. But at the same time, the difficulty level can still be intense and is at a perfect point. I lost battles, I won battles, but I never felt ripped off by cheap difficulty.

You can also switch out your party at any point and have up to three members battling at once. Each character feels very unique. Some focus on power while others focus on magic. Some characters don’t have many attack moves but they can heal teammates or speed up moves for the group. Rearranging the team and completely changing the strategy is a huge part of the fun and challenge of the game. Enemies have weaknesses, like physical or magic moves and lightning or fire moves. You can find and place gems to give to the party members to change and improve the statistics of each character. You can do things like give them more defense or change the attacks to lightning. Each character also has his/her own skill tree. You can choose which abilities and move sets to unlock and improve on; which gives, even more, freedom for expression in your favorite play style and strategy.

Let me take a moment now to try to explain how absolutely incredible the art and music and game feel Child of Light possesses. Using the incredible UbiArt Framework, Child of Light is a visually stunning game. It uses a water color art style that looks like it’s ripped right out of a beautiful centuries old fairy tale book. The game is bursting with life and personality. The brilliant art style perfectly coincides with the story, characters, and poetry of the game. The backdrops and backgrounds of each level and battle look like a painting, a true work of art that would be found hanging in museums across Europe. Each character and enemy is given so much detail. The music in Child of Light is a masterpiece. Fully orchestrated piano, violin, drums, trumpets and more give the game a sensation unlike anything I’ve played before.

I talk about “game feel” from time to time. Game feel is a combination of art, music, storytelling, game play and pure magic that some games have that allow for this unexplainable feeling that allows the gamer to completely be immersed in the world. Bioshock creepiness nails this. The Last of Us is brilliant with this. Wind Waker’s charm and beauty do this amazingly. Super Metroid’s eeriness does this. The game “Journey” is another example. Imagine the developer creating an idea, feel, and an emotion for the world of the game. Imagine the developer making every single game choice to correspond with this idea. From music and art to gameplay and even how the pause screen looks. Literally, every aspect of the game is there for a reason and is done with pure excellence. Game feel is sort of when all of this is done in just the right way, with true purpose and distinction, so the gamer really feels the game in unparalleled ways. Far and away Child of Light is the most emotionally powerful game I’ve played in years. There’s no easy way to rate the “game feel” of a game. Some games have it and some don’t. More specifically, most games don’t have it. There are good games out there that just don’t have that game feel, and they end up being good games and nothing else. Then there are good games out there that have incredible game feel that pushes the game to new heights. But the best games of all time are great games by themselves, and then they throw in this incomprehensible immersion that completely takes over and allows the gamer to truly live out these games. Child of Light is one of the best “game feel” game I’ve ever played. The music, the art, the storytelling, the writing, the poetry, the emotion, the love and care and charm and character that Child of Light is bursting with is something that I cannot express enough. There’s a subtle innocence to Child of Light that is something truly unique and truly beautiful.

Child of Light is my favorite game on the Xbox One and my favorite game in years. If I made a list now of my favorite games of all time, Child of Light might crack my top ten. Based on the emotion, storytelling, characters, art, and music alone it would be an incredible game. Throw in an amazing battle system, great progression, perfect pacing, and pure fun and you have yourself a game that is unlike anything the entertainment world has ever seen. In fact, Child of Light is unlike anything the world of art has ever seen before, and that’s saying a lot. The absolute only complaint for some is the length. It will take around 10-12 hours to beat, but that’s without exploring and collecting everything in the world. I didn’t have a problem with the length at all, for just $15 and for the type of experience given, it’s the perfect length. If you haven’t played Child of Light, please show Ubisoft some support for making games like this. Buy the game, play the game, fall in love with the game and fall in love with the reason why video games can provide us something that nothing else can.