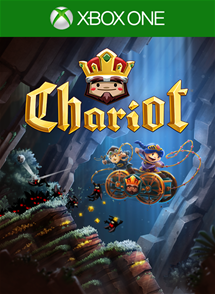 Chariot is a puzzle based platformer with couch co-op features and a humorous tone. Developed by Frima Studios, the game tasks you with pulling and pushing the king’s funeral wagon through caverns and caves to a place to bury the remains. Along the way the witty king’s ghost complains and barks out orders as he wants you to collect as much loot as possible and find the perfect place to rest. The game focuses on secrets, unlocks, and branching paths in level by level progression.

Chariot’s gameplay is extremely simple. Each level however is not. The player is tasked with basically moving the chariot through, over, under, around obstacles to the finish of the level while collecting gold. There’s a rope that can be attached to the chariot to pull it over tough objects and to the goal. There are branching paths and hidden items everywhere. Some trails lead to more gold and other may lead to blueprints that can unlock equipable items to help along the journey. Items like a light to travel in the dark or a pin to place the rope in one spot to let the chariot hang to help traverse to new spots. The gameplay is straightforward to a fault. Although this could be categorized as a puzzle game, it will almost never challenge the mind. Each “puzzle” moment was just another time-consuming obnoxious barrier in the way. Moving around is slow and monotonous, as it takes an extensive time to just move the casket on wheels anywhere. The gameplay isn’t demanding enough on the brain to make it feel like a puzzle and the movement isn’t fun enough to make the game feel like a platformer. The levels are massive. The first few are basic, but the deeper you get into the game the larger the maps become. The branching paths at first are nice, but quickly it becomes tedious to collect everything. In a game like Mario, as an example of a standard platformer, when you see a pipe to climb down or a secret path you can quickly run down at full speed, hop on some goombas on the way, get the secret Yoshi coin and be on your way. It’s fun to go find hidden things because just running and jumping is fun in it of itself. In Chariot it feels like such a chore to just get to the finish, why would I feel obligated to go off and explore in different areas?

The good thing about the hidden items in Chariot is that they do improve the overall experience. In many games the collectables are just for fun—in Chariot they actually allow for the unlocking of some helpful items. However with so many branching paths it became annoying to take the time to go down all of these paths and get gold nine times out of ten and only get that nice blueprint after every nook and cranny has been checked. Gold in it of itself is used to buy things after turning in blueprints at the store, but running out of gold is hard to do as it’s everywhere.

Chariot does a very nice job teaching the player about gameplay mechanics. In some games all you get is a picture of a controller with words mapped to each button (one of my personal biggest video game pet peeves). In other games there can be lengthy confusing tiresome tutorials. I think the bet games educate how to play the game by creating intuitive level design that naturally teaches what to do. This could be as simple as just having a sign that says, “Don’t fall down that pit man, there’s totally snakes and stuff down there and that’s just scary! Press A to jump over it kay?” Or it can be as helpful as seeing that first bullet bill in Mario sail way over your head, so you can clearly see how that enemy moves and attacks, so that the next time it actually does fly straight at Mario you can jump over it with ease. Chariot does this smart instruction of its game for the most part, except when it comes to attacking the bad guys…

One of the most annoying parts about Chariot is the enemies, or as the king calls them, looters. Rat like creatures and bat like creatures hide inside of holes in the wall and attack the king’s treasury to attempt to run off with the gold. The first few times this happened to me I had no idea that I could slice these little cretins by pressing ‘X’. Once that’s learned they become just obnoxious foes that get in the way. The way to avoid them completely is to move quietly and slowly passed the dark holes they live in. Simple enough right? WRONG! You have to move like a slug on sedatives to evade these snatching scalawags. Seriously just the slightest movement will make them all attack you, which again isn’t a big problem it just makes the game THAT much more boring. Even worse is that the majority of the spots where the looters are hidden are places that are impossible to avoid. For example I fell down a mandatory pit and at the bottom were three holes filled with bats that came swarming out as the king screamed out, “I THOUGHT I TOLD YOU TO BE QUIET!” I had literally no choice but to awake all of these loathsome thieves. Or on similar moments there are barriers to climb over and drop down on the other side and even though I see the looters waiting in their little hole and I know I can’t make a big noise, the only way to get down off the ledge is to drop down right on top of them. It’s like every single decision made in the game’s design was to force the player to move unnecessarily slow. To reiterate, the game’s movement and pace is already very slow. There are seemingly endless branching paths that give me things that only slightly push the game forward. The “puzzles” are more like exhausting time-consuming hills to climb up and over as opposed to creative brain-teasers. And now they throw in enemies that provide no physical challenge other than being MORE dreary obstacles in my way and if I want to try to avoid them completely I have to move even slower and quieter than ever? I’m not sure if I’ve ever played a game this anti-ADHD! I’m not at all opposed to slow paced methodicital games, in fact I love a lot of them. But because the puzzles aren’t really puzzles, the platforming really isn’t platforming, and the enemies aren’t really enemies there doesn’t seem to be a logical reason at all to make this game so deliberately sluggish.

There is couch co-op in Chariot but no online play at all. Each level can be completed a bit easier and faster with two players pushing and pulling the dead king to the goal. And there are also hidden areas in every level that can only be reached when two players combine forces and take on the task together. This actually helps the game, as the quicker pace negates some of the slow-paced flaws. But it’s not enough to save the game completely. And the decision to be couch co-op only is a bad one. I do love that couch co-op has made a small resurgence as of late, there’s nothing quite like competitively or cooperatively playing with a buddy right by your side. But many of us don’t have this opportunity. Why not be able to jump online with a friend and tackle the king’s demands as a team? It’s ashamed that this isn’t an option as it could have been one of the games saving graces.

There is a charm about Chariot that is nice. The art style is simple yet colorful and vibrant. In some levels plants and colors grow and shine as soon as you walk near them. The whole game takes place underground, so it can’t stretch its wings in very unique ways but the overall graphical design is still fine. The animations are cute and the characters are fun. However just the game itself, it’s probably too simple for its own good. How many indie style games look pretty much exactly like this? It’s wonderful to see games like Fez, Limbo, SuperTimeForce or Minecraft be limited in their overall graphical power but still manage to create their own unique artful style. Chariot is just another cartoonish sidescroller. The voice acting is one part perfect and one part appalling. The king does the majority of the speaking and his lines are often clever and amusing. He’s both demanding and needy, which is always a hilarious mix. His lines are quickly repeated however and this get’s old fast. Meanwhile there’s a skeleton that runs the shop above the caverns and the writing and execution of his character is awful. His voice completely doesn’t fit. The moment he started talking it pulled my out of the game’s experience and I for an instant didn’t even know who was talking. I thought the skeleton CLEARLY can’t sound like that, can he? His jokes fall flat every time. He’s like the poor stand-up comic who should probably just call it quits because tomatoes are about to start flying but he just keeps going.

Overall Chariot is a big disappointment. It has some things going for it. An interesting game mechanic, a silly slapstick story, charming visuals, and it’s October 2014’s free game of the month for Xbox Live Gold members! But the puzzles are to brainless, the platforming is to slow and uninteresting, and the visuals never go beyond the average indie art style stigma. Even the crazy king’s undead jokes and his journey for riches and the perfect resting place can’t save Chariot from itself. Honestly some games are broken, some games are flawed, some games are unfinished, some games are designed poorly, and some are executed poorly. But no matter what—games need to be fun. If a game is perfect in every way, but it’s not fun, then it has little to no purpose. Sometimes a game can be imperfect but still be a lot of fun. And In the end Chariot is just boring—to go along with its many other flaws—in the end Chariot is just not fun.