Captain Toad is a character initially introduced in Mario Galaxy for the Wii. He’s the leader of the Toad Brigade, a group dedicated to helping Mario with his epic journey by giving him stars, 1-ups, and more. He carries a backpack and a headlamp and often gets in over his head. Along with helping in the Galaxy games, Captain Toad became a playable character in Super Mario 3D World in small bonus special levels. These levels were perhaps the most innovative and fun part about the entire game, and Nintendo saw something special in Captain Toad’s side adventures. Nintendo unveiled the game, Captain Toad: Treasure Tracker for the Wii U in early 2014 and the game launched on December 5th in the same year. Treasure Tracker is a simple yet fun game that is bursting with life and charm. It’s a testament to Nintendo’s unparalleled ability of creating inventive and enjoyable games with its massive roster of characters. Nintendo needs to make more spin-offs, for more reasons than one. To allow itself to not flood the market with the same games, like the New Super Mario franchise or the Mario 3D Land/World franchise over and over. And instead make those games at a reasonable pace and appetizer the gamers with great side content like Toad’s escapades in Treasure Tracker.

Captain Toad’s movements are very constrained, especially when compared to the Mario’s acrobatics. He can move and run, he can climb ladders, and he can pluck and throw objects. On top of that there are level specific things he can do like ride a mine-cart or control a cannon. Overall the levels are designed to create fun gameplay within the games restrictions. Many games not today are all about giving the player the ability to run, jump, and shoot, any way he or she wants. Games like these are all the rage, just look at Sunset Overdrive or every online shooter as of late; everyone can run off walls and practically fly through the air. These games can be fun, but they can also lose focus. Captain Toad: Treasure Tracker is a puzzle game. The goal is very simple, get to the star. But on the way there are three jewels that can be collected and a side mission as well. The levels are almost like floating puzzle boxes in the air; you can control Toad but also can control the camera to manipulate the angle of the world. Often there are hidden items or passage ways can only be seen once the world is rotated to the perfect spot. In this way the game really feels like a treasure hunt. There are hidden items all over, and even when the jewels or final star is right out in the open, it’s a puzzle to just find out how to get there. With each level only taking a few minutes, the replayablity is great. It’s a blast to find all the jewels and reach the finish. And after you complete the level, there will be an added side mission that becomes visible. Sometimes that mission was already completed without you even noticing. These side objectives are fun and can range from finding the hidden gold mushroom, to collecting at least 75 coins, to taking down every enemy. 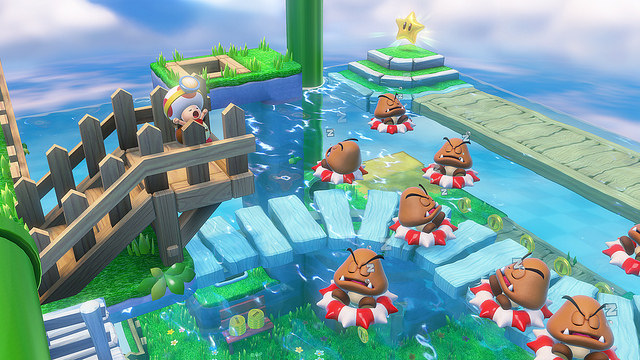 Speaking of enemies, Goombas and Boos have never been more dangerous. Since we don’t play as Mario or Luigi, the challenge of the game isn’t about simply demolishing each enemy you see, it’s more about trying to avoid them while trying to figure out how to destroy them. Just like every enemy of the Mushroom kingdom, simply landing on their head is their mortal weakness. Since Toad can’t jump, this has to be done in different ways. There are times when Toad can drop down on the enemies head from a higher position. Other times Toad can plug a turnip from the ground and chuck it at them. And other times still there can be level specific things like environmentally killing them or finding a super powered pick-axe to wipe them out. Again, the formula of limited the player actually creates a dynamic where it’s more fun to kill the enemies because it takes thought process and execution.

The level diversity is very good. Some levels take place under water, where movement is slowed and fish swim about. Other levels are in jungles with more secrets than normal and giant piranha plants. There’s a level on a train in the middle of a blizzard, levels in caves on mine carts, inside haunted houses with mischievous Boos, and more. The challenge of each level is usually varied as well. One level may be very puzzle heavy, with switches and secrets that make the player think. Then the very next level may be filled with enemies and Toad needs to take them all out. There’s a level where Toad rides a raft across poisonous waters, another where platforms are invisible and can only be seen when a button is pressed. The biggest complaint with diversity is with the bosses. Sadly, the game uses the same bosses multiple times with just small variations. I personally hate this trend in gaming. There’s nothing fun about playing the same boss over and over with small changes. Unless it’s a game like Mario 64 or Mario Galaxy, where meeting and fighting Bowser three times feels like an accomplishment and an epic journey. But when the boss is just a fat bird who hordes jewelry or a giant lizard in lava that Toad fights over and over it becomes repetitive and boring. 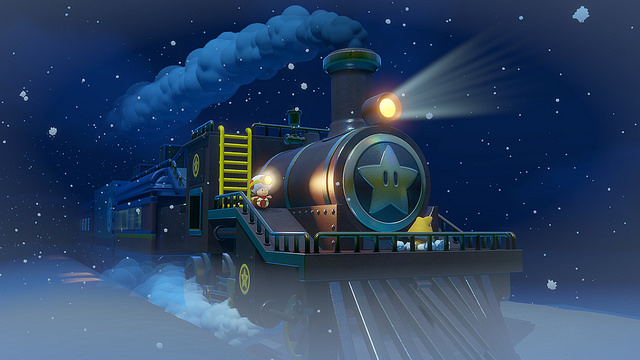 The visuals in the game are very pretty; of course they won’t win any graphics of the year awards but they are nice nonetheless. There’s a lot of color, brightness, and flare in every level. The characters movements and the little touches in every aspect of the game are fantastic. Nintendo knows how to make a good looking game, that’s a fact. The music is sub-par when compared to Nintendo’s standards. There are some nice little tunes, but nothing that really jumps out and sticks in your head for months the way that Nintendo music so often does.

Nintendo has done a great job with Captain Toad: Treasure Tracker. The game is pretty, replayable, and most importantly, fun. Nintendo just knows how to make fun games. Maybe they don’t have the hubge explosions or deep dramatic stories, but Nintendo games are straight up fun. The game gets a bit repetitive when it comes to the bosses, and this is no Mario Galaxy 3. But in my opinion it’s the most fun Mario game since Mario Galaxy 2. In the case of Super Mario 3D World, the game chooses to limit itself, with singular objectives and a boxed in world. It becomes the opposite of the grand beautiful ambitious efforts of the Galaxy series. And in many respects Captain Toad is the same as 3D World, with a small scale and simple mechanics. But that’s fine. We expect Mario to push the limits and be flying around and saving the world. Meanwhile Captain Toad is narrowly escaping a room with a couple Shyguys, but I wouldn’t have it any other way.
Nintendo please keep making spin-offs. Let Mario Galaxy be epic. Let the Zelda games blow our minds. Save the simplistic great fun for small scale games like Captain Toad or Hyrule Warriors.